Louisville Lives up to Title of “Derby City” 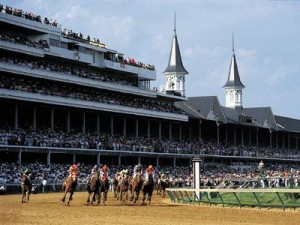 Spring has sprung in Kentuckiana and that means one thing: Louisville is transforming into Derby City.

The 140th running of the Kentucky Derby is Saturday, May 3, 2014 under the twin spires of Churchill Downs.  Are you ready for “The Most Exciting Two Minutes in Sports?”

Leading up to The Run for the Roses is the Kentucky Derby Festival that lasts from April 12 through Oaks Day on Friday, May 2. As always, Thunder Over Louisville kicks off three weeks of exciting events that are sure to be fun for the whole family. See the full schedlue below.

So, Louisville, use the comments below to tell us about your Derby plans. Are you having a Derby party? Are you watching the races from Millionaires Row, the infield, from home or not at all? Will you be catching the fireworks and aerobatic excitement of Thunder? Will you be among the throng lining the streets for the Pegasus Parade?