Thunder Over Louisville Lights Up the Sky – All Day and Night 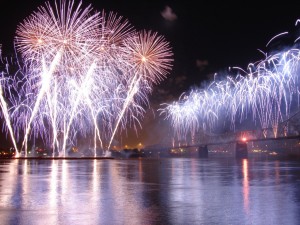 Thunder Over Louisville is the explosive kick off event for the weeks-long Kentucky Derby Festival leading up to the May 3, 2014 Run For the Roses. Held since 1990, Thunder combines a collossal air show, a huge waterfront fair atmosphere and North America’s largest annual fireworks display that lasts nearly half an hour with pyrotechnics launched from bridges and barges. It’s pretty spectacular stuff. Since 1997, Thunder boasts an average attendance of 625,000 people at the all-day event.

Thunder Over Louisville 2014 is Saturday April 12 with the center of action at Waterfront Park. The airshow this year boasts such popular features as the Navy Blue Angels and a nearly window-shattering F22 Raptor demonstration as well as numerous aerobatic acts. Breaks in the all-day airshow offer a perfect opportunity to wander around Ford’s Thunder on the Ground – a fairground atmosphere that features a climbing wall, rides and no shortage of vendors and greasy food from the Chow Wagon.

Don’t spend too much time wandering, though. The action does not stop with the airshow or at the midway. Waterfront Park fills up fast, so you will want to be sure to stake out a good viewing location for the nighttime fireworks display that starts at 9:30PM.

Every Thunder Over Louisville event has had an underlying theme for the musically choreographed pyrotechnic display. Past themes have included Americana, Hollywood, the Millennium celebration, country music, rock music, television, Broadway and more. The 2014 display is called Throwback Thunder and will incorporate a “best of” style display that draws elements from past shows.

Admission to all of the riverfront fun is included with your Pegasus Pin, available at locations around Kentuckiana.