Weekend I-265 Shooting Still Under Investigation

A male in his late-40s was treated and released from University Hospital after being shot while driving on the Gene Snyder Freeway Saturday evening. 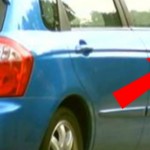 The victim was driving south on I-265 near Smyrna Parkway in southeast Louisville when he was struck by a bullet from a large caliber handgun that entered the vehicle through the passenger door.  The two children in the vehicle with him were not injured.

The man reported that he did not see the shooter.  Instead, he said that he just heard a ‘pop’ and then realized that he had been struck.

LMPD searched the area but have, thus far, have been unable to locate any further evidence or witnesses.  Anyone with information is asked to call the Crimetip Hotline at 574-LMPD (5673).