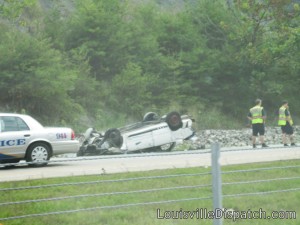 Several wrecks in and around the metro area combine with Kentucky State Fair traffic to slow down Tuesday evening’s commute for Louisvillians.  At least two of these crashes occurred on eastbound Gene Snyder between I-65 and New Cut Road.

One accident involved a pickup truck which collided with a tractor trailer near New Cut.  Despite occupying both lanes of Gene Snyder, traffic was still moving eastbound as Louisville Dispatch staff was in the area.  Crews working the overturned vehicle near I-65 had traffic blocked and backed up with westbound traffic also slowing to a crawl.

Drive safely and expect delays if you are headed out to see Kenny Rogers at the State Fair or any of this evening’s events around Louisville.