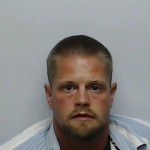 Graphic court documents filed at yesterday’s arraignment hearing detail the charges and probable cause against 33 year old Joseph Oberhansley.  Oberhansley’s criminal history includes conviction for manslaughter and attempted murder in Utah stemming from the killing of his then-girlfriend and shooting of his mother.  Those crimes put Oberhansley in prison for over 12 years before being paroled in 2012.  More recently, he has been charged with multiple driving infractions such as speeding and driving on a suspended license, arrested for choking a patron of a bar and resisting arrest while naked in 2013 and then leading police on a low-speed chase months ago.

Oberhansley was free under a bond reduced from $25,000 to only $5,000, resulting in his release by posting a 10 percent payment of only $500, when he allegedly committed his latest series of criminal acts.  The latest charges (warning – graphic descriptions) include three counts:  the stabbing murder of ex-girlfriend, 46 year old Tammy Jo Blanton, abuse of a corpse by removing some of Blanton’s organs, and breaking and entering into Blanton’s residence.

Court proceedings and documents also indicate that Oberhansley may have eaten some of Blanton’s removed organs.