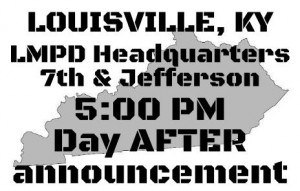 Following last night’s announcement of a Ferguson, Missouri, grand jury decision to return a “no true bill” on each of the five indictments – meaning that officer Darren Wilson will not go to trial for the shooting of Michael Brown – demonstrations were seen in Ferguson and many of the nation’s larger cities.

Although St. Louis Prosecutor Bob McCulloch spent more than 45 minutes in a press conference explaining that the grand jury saw all available evidence – including more than 70 hours of testimony from about 60 witness (including those witnesses who contradicted the evidence or each other) -and made their own decision, many of the demonstrators claimed that justice had not been served.  Despite calls for peace from police, Brown’s family, and even the president, demonstrations quickly turned violent as protesters taunted the police, broke windows, looted businesses, and set fire to vehicles and buildings, leaving much of Ferguson smoldering this morning.

Given the events that unfolded in Ferguson following the announcement, these planned activities may some Louisvillians worried.  However, one LMPD officer with whom a Louisville Dispatch editor spoke said that they did not anticipate anything happening, but suggested that citizens may want to begin avoiding the area at 3pm if they are concerned.