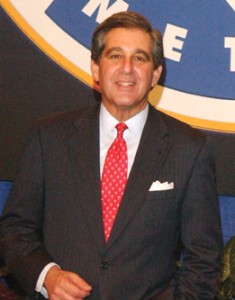 Jerry Abramson is stepping down from his position as Kentucky’s Lieutenant Governor after Barack Obama tapped the democrat for the role of White House Liason to Staet and Local Government.  Abramson earned the nickname of Louisville’s “mayor for life” after occupying the office for 21 years – the longest tenure in the position’s history.

One of Abramson’s duties in his new role will be to help coordinate with states on Obamacare’s upcoming second open enrollment period which begins on November 15 and lasts for three months. Abramson was tapped, in part, due to his experience as chairman of Kentucky’s health care initiative, one of the more successful state exchanges under Obamacare with more than 400,000 people enrolled.  This announcement comes at an interesting time, as John Boehner and Mitch McConnell renew efforts to repeal the Obamacare law following the “shellacking” suffered by democrats in the midterm elections.

Additional  duties for Abramson include work on education and economic issues, including work toward raising the minimum wage in states and cities as Congress rejects Obama’s call for a national increase.

The appointment, not subject to Senate confirmation, sees Abramson replace departing David Agnew.  The position reports to Obama consigliere, Valerie Jarrett.  Former state auditor Crit Luallen will step up to fill the state’s vacated second-in-command role.  Luallen has also served in various positions in the Commonwealth, including state budget director, secretary of the Governor’s Executive Cabinet, secretary of the Finance and Administration Cabinet and secretary of the Tourism Cabinet.

Abramson’s resignation will be effective November 13 and he will begin his new position the following day, one day before the open enrollment period begins.