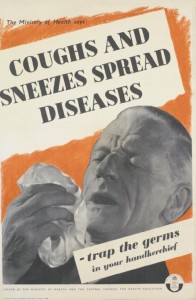 Colder weather means a lot of things: Super Bowl, Christmas-time, sledding, and influenza.  Feeling under the weather is obviously unpleasant, but a better understanding of what could make you sick may help protect you.

This year’s flu season could be especially severe due to a mutation in one of the strains of  virus that is in the vaccine.  It is estimated that every flu season anywhere from 5% to 20% of the US population  contracts an influenza virus.  Each year approximately 200,000 people are hospitalized for influenza and influenza-related complications.  High risk populations include seniors, children under the age of 2, and people with compromised immune systems.

Influenza is a respiratory illness caused by a virus.  Symptoms can develop in a little as 24 hours after exposure, but can take up to 4 days to show up, according to the Centers of Disease Control.  Symptoms include fever, cough, sore throat, runny and/or stuffy nose, body aches, fatigue, and in children, gastrointestinal upsets.  If you start to feel sick, you are already contagious.  People are contagious starting the day before symptoms develop and can be contagious for up to a week after becoming ill.  The virus is spread from person-to-person via droplets from coughs and sneezes that are either directly inhaled by someone else or picked up indirectly from surfaces, such as door knobs.  It is estimated that a contagious person can spread particles up to six feet away.

There are a variety of ways that you can protect yourself and others during the flu season.  Wash your hands frequently, cover your nose and mouth when you sneeze or cough, stay at home if you feel sick, and get the vaccine.  The seasonal flu vaccine is recommended for every person 6 months of age or older: children up to 8 years may need two doses to be fully protected.  You should get the vaccine every year since there is a new vaccine every year and protection is not long-term.

The flu vaccine typically contains three strains of virus, although some doses contain four strains.  The H3N2 strain of virus that part of this year’s vaccine was based on has mutated.  It is believed that people who have received the vaccine may still be protected from severe illness if exposed to the mutated virus.  People will still have an immunity to the other strains in the vaccine.

If you do contract the flu, you can expect to feel ill for up two weeks after symptoms develop.  There are antivirals available through your doctor that can help shorten the duration.  Generic names for these are oseltamivir and zanamivir.  They are usually prescribed for five days and should lessen the symptoms and shorten your sick time by 1-2 days.  Most people will clear the virus on their own over time, but if you develop complications such as: a cough that disrupts your sleep, a fever that won’t come down, shortness in breath, a sinus infection with pain in the face, or symptoms that get worse after a short period of feeling better, you should seek medical attention.  Antibiotics, such as penicillin and its derivatives, will not be prescribed for influenza alone.  Antibiotics are used to treat bacterial infections, not viral infections such as the flu.

There are some conditions that would prevent you from receiving the vaccine as a shot, but the intra-nasal spray vaccine may be acceptable.  If you have more questions about the seasonal influenza vaccine and if it is right for you, speak to your doctor or pharmacist.