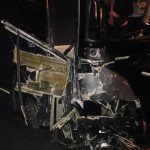 A charter bus taking 29 Bullitt Central cheerleaders and three coaches to the Cheer National Championship competition in Orlando was involved in a head-on collision near exit 259 on interstate 75 near Atlanta overnight.

Early reports indicate that a suspected drunk driver going the wrong direction may have been the cause of the collision, which happened around 2 a.m. this morning.  The involved bus was one of four traveling from local schools.  After determining that there were no injuries, the Bullitt Central students and coaches were placed on other buses

The Miller Transportation bus was part of a group of four buses from various schools (including Bullitt East and Larue County). Davis says the Bullitt Central students and coaches were checked at the scene for injuries, then placed on the three other buses, which continued on to the Orlando competition.

Reports are that that the unidentified female driver of the car that hit the bus was up and walking following the collision.