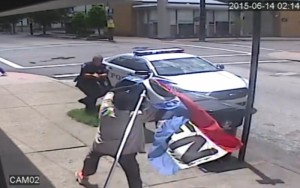 Authorities have identified the man shot and killed by an LMPD officer over the weekend as 35 year old Deng Manyoun.

Manyoun, who apparently fit the description of a suspect who had just assaulted a woman, is shown on surveillance video walking unsteadily down the sidewalk when the LMPD unit pulls on scene and the officer exits his vehicle.  In the video (below), the officer appears to remain calm although Manyoun seems to be aggressively and act agitated before walking out of frame and returning with a metal flag pole, which he begins swinging at the officer.  As he was being attacked, the officer fired his service weapon at the pole-wielding suspect, injuring him.  Manyoun later died at University Hospital as a result of his wounds.

Despite video evidence to the contrary, several so-called eye witnesses were reported as having claimed that Manyoun was unarmed and did not attack the officer or that the officer behaved aggressively and had his hand on his sidearm as soon as he exited the vehicle.

LMPD Chief Steve Conrad defended the officer’s actions, stating that it was an act of self defense.  Conrad also said that he did not believe that Manyoun could not speak or understand English.

This was far from Manyoun’s first run-in with the law.  His record includes charges of criminal trespass, resisting arrest, menacing, indecent exposure, and multiple disorderly conduct arrests.  A 2009 record indicates that he was booked into Boone County as a federal prisoner by Chicago immigration officials.  Another news story names Deng Wol Manyoun as the perpetrator in a 2013 attack on a clerk and a security officer at the Citizenship and Immigration Services office at the Gene Snyder Federal Courthouse in Louisville.

The LMPD officer, who has received nearly 20 letters of commendation over the course of his 10 years of serving on the force,  is on administrative leave pending an investigation by the Louisville Metro Police Department. 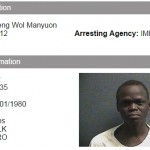 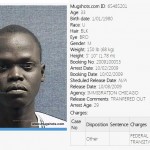 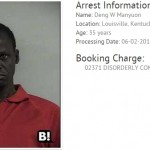 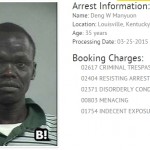