Fandomfest 2015 is Underway in Downtown Louisville 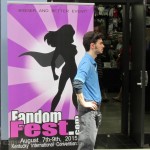 The 2015 edition of Louisville’s Fandomfest has kicked off at the Kentucky International Convention Center downtown.

This celebration of all things pop, sci-fi, anime, gaming, and comic related draws large crowds each year as visitors meet their idols from the big screen to the small screen and from the pages of graphic novels and comics to the pages of favorite tomes. 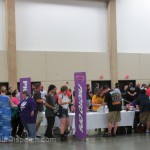 Fans line up well in advance of celebrity appearances, eagerly anticipating the chance to meet them, shake their hands, exchange stories, and pose for photo opportunities. This year, Fandomfest provides the opportunity for attendees to meet celebrities from movies and TV such as Billie Piper, Carrie Fisher, Billy Dee Williams, Peter Mayhew, Josh McDermitt, Kevin Smith, and Jason Mewes, and sports stars such as Ric Flair, Johnny Bench, Reggie Jackson, and Pete Rose.  Attendees in line buzz with excitement over the opportunity to get an autograph from their favorite celebs. 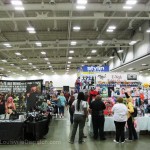 Visitors that forgot to bring something to get autographed (or need that special piece to complete their collection) don’t have to look far.  The Fandomfest show hall is packed to the gills with exhibitors and vendors showcasing their wares including comics, cards, sports memorabilia, classic gaming systems, costume components, art supplies, collectibles, action figures, and their own original works from paintings to novels. 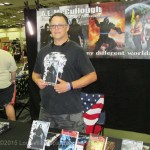 One such purveyor of original work is Kentuckiana’s own A.E. McCullough.  McCullough – sporting a tee-shirt showing his fondness for another vigilante character – told us about his new novel, The Reaper:  Grimm Vengeance, about a former Army Ranger who takes justice into his on hands when he takes on the thugs of a street gang.  McCullough, who lives in Taylorsville and works in Louisville, said that this was his second Fandomfest. 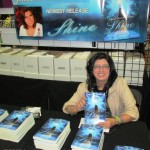 Another sophomore exhibitor at Fandomfest 2015 is an author that had to travel slightly further to attend.  Addie J King lives just north of Dayton, Ohio and was in town to showcase her latest release, Grimm Legacy.  Addie has a lot of traveling to do, with her next stop being Wizard World in Chicago.  On an even longer journey, Joann H. Buchanan, came from Kansas to spread the word about the latest work in her H.A.L.O. Saga, Shine, at her first Fandomfest. 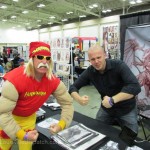 Moving back closer to home, we also had a chance to talk with Louisville transplant (by way of Cleveland), Steve Messenger, who was creating buzz by passing out free samples of his original artwork – as well as letting out his inner Hulkamania.  This was Steve’s first time exhibiting at Fandomfest, but not his first time attending.  He recently moved to the area after falling in love with it following a previous visit which included – you guessed it – a visit to a previous Fandomfest. 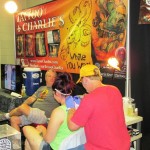 Showing off a different kind of local original art, some of the crew from Tattoo Charlie’s were on hand to put ink to skin for attendees.  Their booth display not only offered the chance for attendees to decorate themselves, but also a chance to win some free ink by dropping their names into the fishbowl.  While we were there, we got to see artist Darin Ennis doing what he loves to do.

Despite everything going on across the exhibit floor, the action doesn’t stop there. 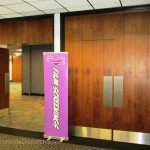 Fandomfest is packed with film screenings.  We had a chance to sit in on a couple of these, including Samuel Platizky’s comedy-horror Devil You Know, which follows a young lady’s journey into hell as she hopes to free her father’s soul.  We also sat in on Alfred Giancarli’s Don’t Despair, a disturbing tale about a couple embarking on a deadly quest to connect with one of their gruesome idols.  The screenings of these shorts, and many others, run all weekend and offer attendees the opportunity to get some entertainment while resting their feet from roaming the exhibit hall.

Fandomfest’s offerings don’t stop there either.  The show is packed with celebrity Q&A sessions (such as the one that we attended with a couple of AMC’s The Walking Dead‘s pet zombies); panel discussions on a wide range of films, shows, art genres, and more; cosplay judging sessions; gaming competitions; and a full host of after-hours events – many of them geared for the 18+ crowd.

Fandomfest 2015 lasts through the weekend, so there is plenty of opportunity for fans to visit.  Check out our photo gallery and stay with Louisville Dispatch for more news from the show.

One Response to Fandomfest 2015 is Underway in Downtown Louisville