FRANKFORT, Ky. – For the first time since January 2009, Kentucky’s Unemployment Insurance (UI) Trust Fund has a positive balance and is on the path to solvency.

Gov. Steve Beshear today joined lawmakers and business leaders to announce the Commonwealth has paid off the $972 million federal loan needed to meet unemployment insurance benefit obligations during the Great Recession at least two years ahead of schedule.

“Throughout my time in office, I have partnered with lawmakers and business leaders to grow Kentucky’s economy and to manage us through the worst recession of our lifetime,” Gov. Beshear said. “I appreciate and thank their continued commitment to work with us on the unemployment insurance issue these last six years so we could honor our commitments to working families. This partnership allowed us to reach this point today of early payoff of the federal loan and to ensure the solvency of our UI Trust Fund for the future.”

At the height of the recession in June 2009, Kentucky’s unemployment rate hit a high of 10.9 percent. Since that time, Kentucky has seen a steady improvement in the economy – especially the job market.

The state has experienced a decline in the unemployment rate and an increase in the number of Kentuckians at work. Kentucky’s latest unemployment rate in June 2015 dipped to 5.1 percent, the lowest it has been since June 2001. Covered employment, which includes workers covered by state UI laws, has increased by 36,700.

A positive balance in the UI Trust Fund on Nov. 10, 2015, will ensure Kentucky employers will not be subject to the additional credit reduction rate of 1.5 percent when they file their federal unemployment taxes in January 2016.

The early payoff means employers will see a reduction of $105 per employee. 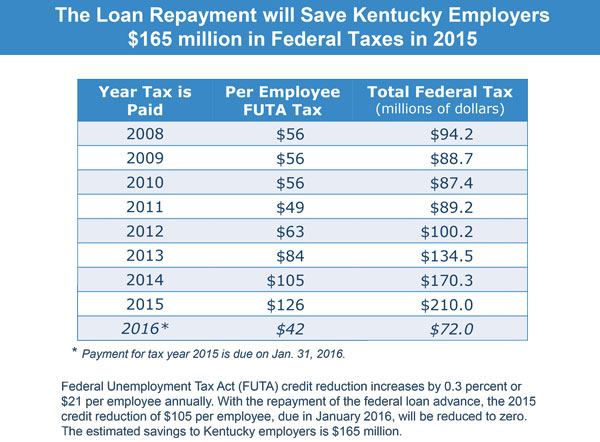 Even before the recession began, Kentucky’s UI Trust Fund experienced high demand for benefit payouts. Beginning in 1999, Kentucky paid out more in unemployment benefits each year than it had taken in through employer contributions.

The difference had been made up by drawing down accumulated reserves. As a result of the recession, Kentucky exhausted its UI Trust Fund at an accelerated rate. By Jan. 28, 2009, the trust fund had been depleted, and Kentucky, like more than 30 states, began borrowing from the federal government.

Gov. Beshear acted swiftly to stabilize the trust fund by establishing the Governor’s Task Force on Unemployment Insurance. Kentucky enacted a series of reforms to structurally balance the UI system, return people to work and move the trust fund toward solvency under the Governor’s leadership and in partnership with the Kentucky General Assembly and business and labor leaders.

“Our state’s repayment of the UI loan to the federal government speaks volumes to how our Kentucky businesses have been hiring and employing our citizens and growing the economy of our Commonwealth,” said Sen. David Givens. “The credit for this unexpectedly quick repayment should be given to Kentucky’s employers.”

“I appreciate Gov. Beshear appointing the Unemployment Insurance Task Force in 2009,” said Rep. Larry Clark. “The task force recommendation was a collective decision by labor and management which will ensure that the UI Trust Fund will remain solvent for years to come.”

“This is excellent news.  This savings will affect virtually every employer in state and shows that our bipartisan efforts have paid off handsomely,” said Dave Adkisson, president and CEO, Kentucky Chamber of Commerce.

A product of the taskforce, House Bill 5 in the 2010 Special Legislative Session modernized the state’s unemployment system with a balanced plan to adjust revenues and benefits to secure the financial stability of the plan for the future.

Beginning in 2012, the law increased the taxable wage base from $8,000 to $12,000 over a 10-year period; implemented a waiting week after eligible workers file a claim before they can begin to receive benefits; and reduced the statutory replacement rate used to calculate a claimant’s weekly benefit amount from 68 percent to 62 percent. 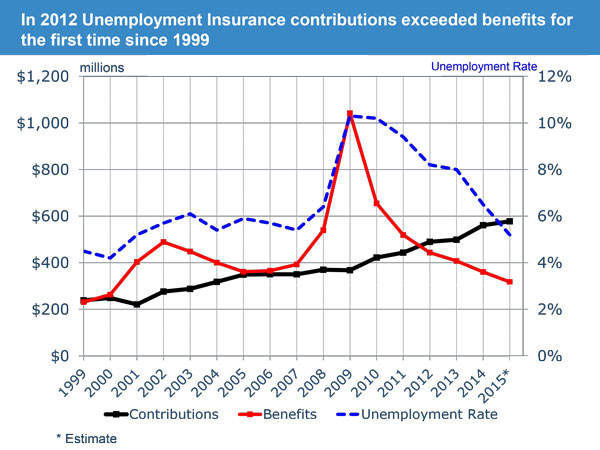 Instead of a “do-nothing” scenario that would have triggered an increase in federally mandated taxes to begin paying off the debt, the Governor and lawmakers estimated that changes in the tax structure as outlined in the legislation would save Kentucky employers more than $450 million in federal tax and interest charges over time and ensure that the balance in the trust fund would eventually be significantly higher to protect against future downturns in the economy.

The bill also implemented changes in tax schedule trigger amounts and instituted other process changes to enhance re-employment strategies and services to meet the needs of employers and job seekers in the new economy. Both benefits and revenues are subject to automatic adjustments based on the balance in the Trust Fund in the future.

Numerous legislative attempts had previously been made to address the insolvency of the UI Trust Fund. The 2010 law changes represent the most comprehensive changes to the system in recent history.

Preserving Unemployment Insurance benefits by saving the UI fund from bankruptcy is an example of the Governor working in a bipartisan manner with lawmakers throughout his term.

Other examples of this partnership with lawmakers include increasing enforcement, treatment and medical oversight to get a handle on Kentuckians’ abuse of prescription painkillers; raising the state’s dropout age from 16 to 18; revising economic development incentives programs; and increasing classroom spending, teacher pay and funding for technology, textbooks, teacher training and school safety