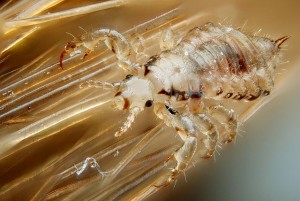 Head lice is typically treated with over-the-counter (OTC) treatments that contain insecticides, such as permethrin and pyrethin. Reports of resistant lice started to appear in the mid-1990s. However, a recent study by Dr. Kyong Sup Yoon from Southern Illinois University, examined 109 lice populations from 30 states; they found that 95% (104 of 109) populations contained gene mutations that enable this resistance. Of the 30 states, 25 had resistant lice, including Kentucky.

Head lice is commonly associated with school children. The Center for Disease Control estimates anywhere from 6 million to 12 million cases annually in children aged 3-11. Head lice is easily transmitted from person-to-person by sharing hats, brushes, and other items that fit over the head. An infested child can pass the head lice to another by simply standing close by. To minimize the risk of catching lice, you should avoid hair-to-hair contact with an infested person. If the person with lice is someone in you family, you should clean clothing, bedding, brushes, pillows, anything that comes in contact with the hair and avoid sharing these items until the infestation is gone. If you find that your child has lice, report it to your day care and/or school immediately.

The most common symptom of head lice is itching. The itching is caused by an allergic reaction to the insect bite. However, itching can take anywhere from two days to several months to present itself, depending on an individual’s sensitivity and whether or not it is a repeat infestation. Head lice and their eggs (called nits) can be seen on the hair, the nape of the neck and behind the ears. Insects can be any  shade of brown. The nits are typically white,and round or slightly oval shaped that are attached to hair strands near the scalp. They will not move on the hair on their own.

Unlike the common cold and many other illnesses, lice will not go clear up on its own. It must be treated. Common treatment strategies are OTC medicated shampoos, which doctors still recommend you try first. If you notice the infestation is not getting better, you should see a doctor for a prescription. The prescription options use different chemicals and the lice should not be resistant. Another treatment option is to physically remove the insects and nits from the hair. A fine-tooth comb, available in most pharmacies, is used to brush the hair. This works best with straight and short hair. However, you can pay a “nit-picking” specialist to do this service for you, but average cost is $250 per hour. It is possible that initial treatment will not kill all of the nits and a follow-up treatment a week later is needed. Itching can continue to persist up to 10 days after clearing the infestation.

More information about head lice can found on the CDC Website.