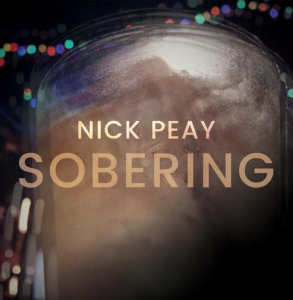 Over the past decade of recording albums, Peay is constantly reinventing himself. This songwriter-rock style CD, as with most of his music, features original songs that have a story to tell, or take some sort of stand (for or against something), or address an important social issue. Sobering includes five mixes that tell a heart-wrenching story: “Put This Bottle Down,” “Every Morning,” I Won’t Fall In Love,” “Sobering,” and “Put This Bottle Down Reprise.”

Singer-songwriter Peay says, “The inspiration for writing and recording Sobering came from thinking about struggles that we all face. I think everyone has something significant that they struggle with or have struggled with in the past. If you can address it, and meet it head on, then you can come out a better person on the other side. And while this CD isn’t autobiographical,” he continues, “I think it tells a story that is probably familiar to all of us. People lose themselves in addictions every day, and it doesn’t have to be drugs or alcohol – it might be a bad relationship or a job, and it’s up to us to find our way out. I believe Sobering speaks to all these things.”

Peay first recorded the songs and released them back in 2006. However, it was his first recording, so the quality was inadequate. Always having loved the songs and the story, Peay felt it needed a chance to be something special. Things fell into place earlier this year with studio time and he was able to go in, record, mix and master the album.

The CD artwork was designed by Peay. “I really wanted to stay away from the overtly obvious ‘alcoholism’ theme that the story implies, but I also think that’s the means to the end to get to the moral of the story,” says Peay. “The bottom right corner symbolizes the black corner you find yourself in at your lowest point, and slowly, as you face your demons, you move into the shapes of things. Although they’re not quite clear, the more you rise, the more things come into focus and you start to have clarity and color, until finally you break the surface and see the light.”

About Nick Peay
Nick Peay’s breakthrough moment in music was during a slot opening up for his dad’s cover band at a Louisville, Ky., pizza joint. He did an acoustic cover of “Thriller” by Michael Jackson.

After that, Peay would front the band OK Zombie before embarking on his solo career, releasing the EPs Life & Love & Us in 2011 and Feathers & Fables in late 2012, as well as a single titled “Looks Like Rain” in between. Each of the EPs are thematic, a trend Peay’s fans can expect to continue. Everything he creates is done so with purpose, as opposed to pulling together a handful of disparate songs and grouping them on an EP or album. His songs are emotional, but they aren’t the stuff of Top 40 radio, where the subject matter is dominated by bad breakups and one-dimensional, wide-eyed romance.

For Peay, it comes back to writing songs that convey his own, unique feelings and perspectives in a way that will also connect with an audience who may see it differently. He feels that the uniqueness in every person should be celebrated, and his way of doing that is in song. This is why in a Nick Peay song, you’ll find characters like the music-store clerk who can’t let go of his rock-star aspirations, or the symbolic blackbird who can’t seem to find his true home – these are individuals in whom his audience may find something vaguely familiar and resonant.

Peay was influenced by the songwriters and bands of the 1960s and ’70s, and that music inspires his songwriting and musical approach. “There was meaning behind what they were saying,” he says. “Nowadays, I don’t feel like musicians stand up for anything. They say, ‘I’m going to write this generic love song so people will like me.'”

This is what drives him forward – finding those new avenues of connection, new avenues of expression and releasing the need to create more songs, unique songs, which in turn pave those avenues for him and, perhaps most importantly, for the listener. The fact that his music has been embraced by Louisville-area radio and also by fans and critics is the balance he has found between the accessible and the original.