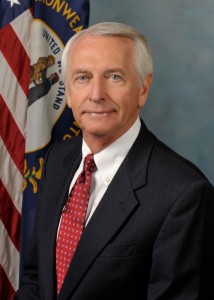 “There are obviously strong feelings on both sides of this issue, but the United States Supreme Court has spoken and same-sex marriage is now legal in Kentucky and the rest of the United States. Regardless of whatever their personal feelings might be, 117 of our 120 county clerks are following the law and carrying out their duty to issue marriage licenses regardless of gender. Same-sex couples are now being married in Kentucky and such marriages from other states are now being recognized under Kentucky law.

The future of the Rowan County Clerk is now in the hands of the courts. The legislature has placed the authority to issue marriage licenses squarely on county clerks by statute, and I have no legal authority to relieve her of her statutory duty by executive order or to remove her from office.

The General Assembly will convene in four months and can make any statutory changes it deems necessary at that time. I see no need to spend hundreds of thousands of dollars of taxpayers’ money calling a special session of the General Assembly when 117 of 120 county clerks are doing their jobs.”