Cheers to Local Beer, Food and Business at the 7th Annual Louisville Brewfest 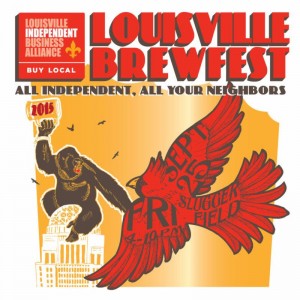 Nineteen different local and regional breweries will offer their craft and specialty beers at the 7th Annual Louisville Brewfest on Friday, September 25th from 4:00pm to 10:00pm at the Louisville Slugger Field. The event, presented by BoomBozz Pizza & Taphouse, is the largest annual fundraiser for the Louisville Independent Business Alliance (LIBA), a non-profit that promotes locally-owned businesses and works to educate citizens on the value of buying locally.

“Here at LIBA, we know that beer is a magical thing,” explain LIBA Director Jennifer Rubenstein. “The businesses at Brewfest are all independent, and they’re all our neighbors, so we look forward to building community by sharing some food and libations with old and new friends – all while strengthening the local economy, since more of our dollars stay local when spent at an independent business.”

Festival goers will have the exclusive opportunity to taste limited edition beers that were made especially for this event by two notable Louisvillians. Louisville’s Mayor Greg Fischer honored his Irish heritage by working with Goodwood Brewing Company to create an Irish Stout he named 5-0-Brew, and local musician Ben Sollee collaborated with Apocalypse Brew Works to create an Oktoberfest style beer he named Kaytoberfest in honor of his cello, Kay. Both beers will be available at the rotating tap while supplies last.

New to the event this year is an interactive art project where attendees can glue bottle caps and other items to the art piece to show their local love. Returning again is the “Brewseum”, a self-directed journey through the history of craft beer in Louisville supported by demos and ‘how-to’ areas, created by Paul Young. An after party will also be held at The Haymarket Whiskey Bar, with free admission for Brewfest attendees and drinks specials for Brewfest VIPs and volunteers.

Admission is $5 which includes a souvenir cup. Attendees must be 21 or older to enjoy the beer, wine and bourbon. (Designated drivers get free admission.) VIP tickets are $45 and include access to exclusive beers, special gifts made by local artisans, larger pours in a commemorative festival glass, and other perks. Food and drink tickets will be sold for $1 each, with full pours costing 4 tickets and food prices vary. On-site parking is $5 at the Louisville Slugger Field lot.