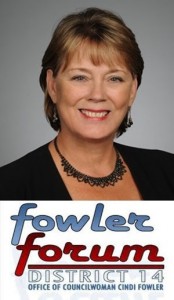 Councilwoman Cindi Fowler would like to encourage residents of District 14 to take part in her next Community Forum on Tuesday, September 15th as a way to learn more about issues and concerns in the district and Metro Government.

“Keeping in contact with the people of Valley Station, PRP and Kosmosdale is important to me and I want to hear from them on how things are going in the district,” says Fowler. “This is also a chance to get an update on what’s going on in the area.”

Representatives of LMPD, IPL, MSD, and Congressman John Yarmuth’s office will be in attendance.

“As we move into fall, there are many programs in Metro Government that people may want to learn more about so I encourage everyone to come out and meet with me and my staff,” says Fowler.

For more information about the Fowler Forum, contact Councilwoman Fowler’s office at 574-1114.