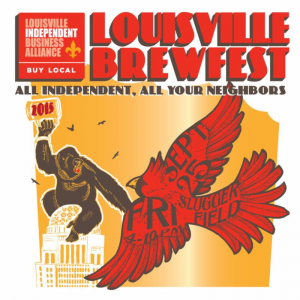 The Louisville Independent Business Alliance (LIBA) will host the 7th Annual Louisville Brewfest on Friday, September 25th from 4:00pm to 10:00pm at the Louisville Slugger Field, 401 East Main Street. The event is presented by BoomBozz Pizza & Taphouse and will feature independent local and regional beer, wine and bourbon, as well as food vendors and a silent auction. Admission is $5 which includes a souvenir cup. Attendees must be 21 or older to enjoy the beer, wine and bourbon. (Designated drivers get free admission.) VIP tickets are $45 and include access to exclusive beers, special gifts made by local artisans, and larger pours in a commemorative festival glass. For more info, visit www.keeplouisvilleweird.com.

In addition to sampling brews from 19 different local and regional breweries, festival goers will have the exclusive opportunity to taste a limited edition beer created especially for this event by Louisville’s Mayor Greg Fischer. Working with Goodwood Brewing Company, Mayor Fischer provided input on the recipe for an Irish Oatmeal Stout style beer, and he will participate in the brewing process at a media event on Friday, August 28th at 10am at Goodwood, 636 E. Main Street. Local musician Ben Sollee will also create his own variety of beer in collaboration with Apocalypse Brew Works that event attendees can sample.

Also new to the event this year will be an interactive activity where attendees can glue bottle caps and other items to an art piece to show their local love. Returning again is the “Brewseum”, a self-directed journey through the history of craft beer in Louisville, supported by demos and ‘how-to’ areas, created by Paul Young. An after party will also be hosted by The Haymarket Whiskey Bar, with free admission for Brewfest attendees.