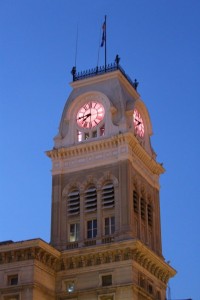 The Louisville Skyline now has an additional color to serve as an important reminder for women during this month. The Historic City Hall Clock Tower at Sixth and Jefferson is now showing pink as a reminder that October is Breast Cancer Awareness month.

“We, on the Metro Council, join with other groups to encourage women to get the screening necessary to ensure that we can fight this disease. We know early detection is one of the best ways to be successful in treatment of breast cancer,” said President David Tandy (D-4).

On Thursday, the President was joined by Metro Council Members, Council staff and representatives from the American Cancer Society and the James Graham Brown Cancer Center to encourage the women and men to get the appropriate screening during the month.

“We all know someone who has been touch by cancer,” said Tandy. “We have many resources and services available to prevent this disease and treatment to fight it here in Metro Louisville.”

“I would like to thank President Tandy and the entire Louisville Metro Council for drawing attention to breast cancer,” said Donald Miller, MD, director of the James Graham Brown Cancer Center. “Awareness continues to be one of the best tools we have to battle cancer.  Early diagnosis through annual mammography increases the options for treatment and the potential for successful outcomes.”

President Tandy also noted that the Metro Council chamber has been decorated with pink ribbons for all Council meetings in October to serve as a reminder that breast cancer screening is important and should be done annually.

To learn more go to: