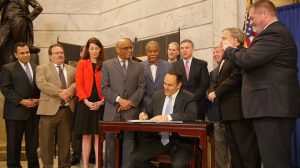 “It is a great day when doing the right thing transcends all political boundaries and all ideologies,” said Governor Bevin. “It’s an honor and privilege to be able to sign House Bill 40 into law. It is critical that there is an opportunity for redemption and second chances because America is a land that was founded on these principles. The greatness, uniqueness, beauty and extraordinary nature of America is based on the fact that we do give people an opportunity for redemption.”

House Bill 40 will allow Kentuckians convicted of certain Class D felonies who have paid their debt to society, stayed out of trouble as required by the law, and have shown that they are indeed trying to get back on track to erase their criminal records and get a second chance at jobs, housing and other opportunities sometimes denied felons.

“This bill is about redemption, good policy and workforce development,” said Justice and Public Safety Sec. John Tilley. “But if you’ve ever spoken with someone who’s been given a second chance and have had a piece of their dignity restored, you know immediately why this bill goes far beyond any policy measure, job or economic development success.”

“I’m grateful to see the passage of a bill that gives hope to tens of thousands of Kentuckians looking for a new start in their lives,” said Sen. Westerfield. “This is one of a handful of enormously consequential days I’ve had the privilege to experience while serving in the Senate, and I’m thankful for the many hands that worked to bring this to fruition.”

“I can’t say enough about how this is going to be a life-altering piece of legislation,” said Rep. Owens. “I think this is probably one of the most consequential pieces of legislation to come out of the legislature this year. The Governor’s endorsement was critical.”