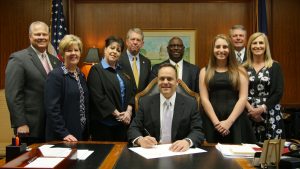 Gov. Matt Bevin, joined by the Guess family and co-sponsors Sen. Dorsey Ridley and Sen. Mike Wilson, today held a ceremonial signing of Senate Bill 228. The bill, which was passed into law April 9, gives a statewide definition for bullying in the K-12 school system.

“It’s always a great day when we can pass legislation that protects our children,” said Gov. Bevin. “No child should ever fear going to school or participating in events because of a bully. This law ensures all public schools in Kentucky have a common definition of bullying, allowing them more freedom to prevent and discipline this unacceptable behavior.”

Senate Bill 228 defines bullying as “any unwanted verbal, physical or social behavior among students that involves a real or perceived power imbalance and is repeated or has the potential to be repeated.” This law is effective at school, in the classroom, any school transportation, school-sponsored event or any place that disrupts the education process of the student.

Morgan Guess, daughter of Craig and Susan Guess, was bullied by a classmate when she was eight years old. Morgan didn’t tell anyone and suffered in silence. Her mother discovered it but not before Morgan started experiencing stomach spasms and panic attacks. Morgan’s pediatrician diagnosed her as clinically depressed and prescribed anti-depressants.

Susan Guess told her that bad things are going to happen in life and that Morgan could choose to ignore it, blame others or be part of the solution.

The duo decided to start the Guess Anti-Bullying foundation and have since been nationally recognized for their work. They have raised nearly $50,000 and have used the funds to bring speakers to local schools, among other projects like hosting the international Inside Out Project.