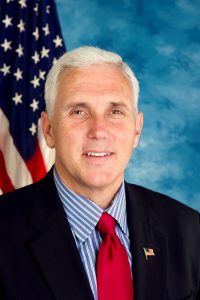 Donald Trump’s campaign appears to be signaling that Indiana’s Governor Mike Pence is dropping his re-election bid in order to fill the position of the Republican front-runner’s VP.

Two other top choices for the vice-presidential candidacy, Sen. Joni Ernst and Sen. Bob Corker have both withdrawn from the list of potential picks.  This comes after rumors have been swirling that Pence would be the choice, fueled by talk that other potential running mates were scheduled for speaking engagements at the upcoming Republican National Convention in Cleveland while Pence was not scheduled.

Pence represents a social conservative position on the GOP White House ticket.  Republican strategists believe that he will draw more rank-and-file Republicans as well as providing fundraising power and conservative credibility on a range of issues on which some may have felt that Trump wavered.

Pence was facing tomorrow’s deadline to decide whether or not he would seek reelection as governor of Indiana.  This means that the Indiana Republican State Committee will determine the GOP candidate for governor for the first time in the state’s history.  The 22-member committee has 30 days to chose a replacement once Pence officially withdraws from a reelection bid.

A formal announcement of the VP pick is expected in Manhattan tomorrow ahead of the convention, which begins next week.  Following yesterday’s tragic events in Nice, France, the Trump campaign decided to postpone the announcement conference.  Trump, instead, opted to tweet out the announcement:

I am pleased to announce that I have chosen Governor Mike Pence as my Vice Presidential running mate. News conference tomorrow at 11:00 A.M.