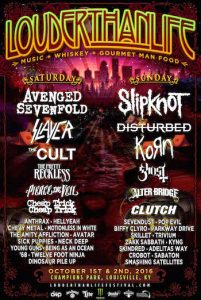 The Louder Than Life Music Festival is set to rock Louisville fans in Champions Park this weekend.  The jam-packed lineup for the two-day festival features mainstream headliners and newer groups from across the spectrum of rock and metal genres.

Bands will be playing on Louder Than Life’s three stages from 11AM until well into the night on both days of the festival.

Headline acts on Saturday include heavy hitters like Anthrax and Slayer, who have been rocking metal fans since the 80s and 90s; Brit rockers, The Cult, recent Rock and Roll Hall of Fame inductees, Cheap Trick; and powerhouse rockers Avenged Sevenfold.  Other acts throughout the day include Pierce the Veil, Hellyeah, The Amity Affliction, Sick Puppies, and others.

The music and fun continues on Sunday with massive headline acts that include Slipknot, Disturbed, Korn, Clutch, and Sevendust.  Earlier shows on the second and final day of Louder Than Life include Alter Bridge, Ghost, Zakk Sabbath, Crobot, Trivium, and many more.

Admission to the festival also includes access to the Gourmet Man Food dining options and the various other entertainment, refreshment, and Louder Than Life Experience opportunities.

So, Are You Ready to ROCK, Louisville?