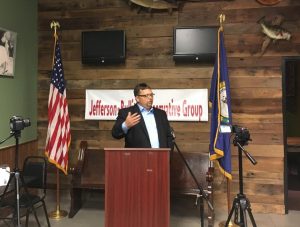 This week, three local candidates running for office held a town hall forum where they took questions from the voters. Michael Payne, Harold Bratcher, and Shane Ranschaert each had a turn at the microphone where they were able to talk not only about policies, but also about why they became involved in politics. All three candidates are running for office for the first time, and all three are unhappy with the state of politics in the Louisville area and felt that the best way to help the community is to become involved. With the election fast approaching and the Presidential race garnering so much attention, it can be easy to lose track of local races.

Harold Bratcher is running the US House of Representatives, District 3. District 3 in KY is all of Jefferson County, and therefore, all of Louisville. Representatives will go to Washington D.C. to represent all the citizens on Louisville in the United States Congress for a 2-year term. Bratcher graduated from Valley High School (class of 1991) and we worked for some trucking companies. He recently opened his own freight company and has been operating out of Louisville since 2013. Bratcher is running against incumbent John Yarmuth, who is seeking re-election for his sixth term.

Bratcher focused on three major talking points: supporting small business, preserving the Constitution, and immigration. Being a small business owner himself, Bratcher knows a lot about what is needed to run a small business. NAFTA and TPP have been brief topics in the recent presidential debates, but Bratcher has believed for years that NAFTA has negatively impacted this country’s economy and believes that the TPP will be just as bad, if not worse. “NAFTA cost a minimum of 1 million union, and non-union high paying manufacturing jobs,” he said, adding that this equals about 25% of the manufacturing capacity that was here previously. With the unemployment rate being as high as it is, he believes the answer is to invest in small business. “Giving $100 million to 100 small businesses will create more jobs than giving that money to one big corporation,” he said. He also proposes cutting taxes across the board, which he believes will create more jobs and by putting more money in consumer pockets, will result in more revenue in taxes.

Bratcher identified himself as a “Constitutional Conservative” and believes that government needs to be smaller and less involved in our everyday lives. He applies this to every Constitutional right, including the first and second amendments.  He admitted that he is a new firearm enthusiast, but recognizes that the laws being proposed are already in place in some of the highest gun crime cities in the nation. “If the laws don’t work in Chicago, why would they work here,” he asked. He also believes that individual, civilian gun-ownership keeps America is safer as nation. Bratcher went on to talk about balancing the budget: “Everyone is concerned about the D and the R. This is why we have no balanced budget and this is why there is gridlock. I’m willing to work towards the middle, but it needs to be a give and take.”

Being the only candidate running for a federal office, Bratcher was the only one to talk about immigration. Bratcher understands that this is a country of immigrants and accepts immigrants who come to the United States legally. His first concern, however, is that we have millions of homeless Americans here and we should address that problem before trying to take on the task of helping other countries.

Michael Payne is running for State Representative, District 28. District 28 starts in the southern part of Pleasure Ridge Park and continues south along Dixie Highway to West Point, KY. State Representatives go to Frankfort, KY where, like the federal House of Representatives, they serve a 2 year-term where they represent a portion of Kentucky residents for state legislation. Payne is a graduate of Valley High School (class of 1990) and went on to study at both Sullivan University and University of Louisville. He has worked as an engineering specialist for UPS, an engineering manager for a local material handling firm, and currently works at Sullivan College as an instructor. Payne is running against incumbent Charles Miller, who is currently seeking re-election for his tenth term. 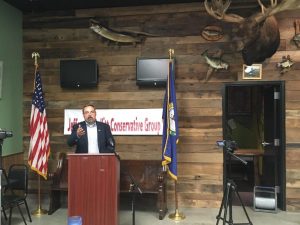 Payne focused on several major talking points: the economic depression, the education system, and crime. Payne believes that best way to address the economic issues is to attract new businesses into the state and Kentucky is having a hard time competing with the surrounding states. He stated that the best way to encourage investments into the state and to encourage entrepreneurs is to reform the tax code with a flat tax and improve the work force through training programs that promote hands on, technical skills.

When it came to education, Payne said, “Don’t throw more money at the problems.” He feels that teachers are being prevented from doing the jobs because of curriculum standards as well as social standards. He believes teachers know best on how to teach their students and that the state needs to take a step back and allow them to teach. Further, Payne says that he would like to see subject matter experts within a field to be allowed to teach without the need for certifications. He feels that this would enable students to learn more and encourage critical thinking. As for higher education, Payne said tuition rates need to be frozen and universities need to start acting like the businesses that they are, not charities. Payne also believes that public universities should be opened up to accommodate concealed carry weapons for license holders on campus while private universities should be left to decide on this issue for themselves.

The heroin epidemic and the rising crime rate has effected everyone in the community. Payne believes that law enforcement needs to be given more ability to do what is needed, and that the judicial system needs to be able to sentence certain offenders more. While believing that dealers and other distributors need to be held accountable, he believes that there needs to be a “compassionate hand to the addicts”. Once in jail, rehabilitation programs need to start and programs need to be in place that allow the addicts access to affordable treatment when they leave jail. 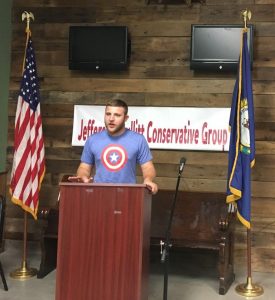 Shane Ranschaert is running for Metro Council, District 14. District 14 is in the far southwest portion of the county, including most of Valley Station west of Dixie Highway between Greenwood Rd and the Gene Snyder, south to include Valley Village, areas surrounding Jefferson Forest to the county line. Councilmembers stay in Louisville where they represent their district for a four-year term. Ranschaert is running against incumbent Cindi Fowler, who is seeking re-election for her second term.

Ranschaert also had three talking points: adequate representation for the southwest portion of the city, taxes and regulations, and the rise in crime and heroin use. Ranschaert said he is tired of seeing Southwest Louisville ignored until election time and he wants to make sure that the residents of District 14 feel like they matter all the time, not just when politicians are seeking votes. Ranschaert explained that he would like to see taxes in the city cut, stating that Louisville is the third most taxed city in the US and one of the most regulated cities in the US. He wants to cut taxes and address infrastructure issues, such as the malfunctioning flood pumps along the Ohio River. He cited a similar plan to Payne’s for addressing the rise in heroin use and crime and wants police to be able to more effectively perform their duties, and wants to see task forces developed to utilize all local agencies to make Louisville as uncomfortable as possible for drug dealers. He also wants to see addicts being helped and treated and not just pushed through the system.

If you did not have the chance to attend the town hall, all the candidates have contact information on their websites and all three candidates have Facebook pages and welcome your questions. As with any election, it is important to be informed and voters should take the time to research the candidates before making a decision. A sample ballot for your location can be found on the Jefferson County Clerk’s website. The deadline to register to vote in this election cycle was October 11. If you are not registered to vote, you can still register, but you will be eligible to vote in the next May primary.