First Derby Ball of the Season Will Be a Royal Affair

“Say Yes To The Dress: Atlanta” Star Will Help Emcee 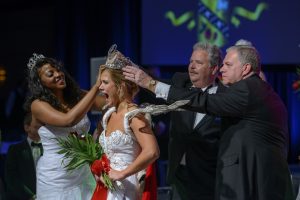 Tickets are available now for the first ball of the Derby season – the annual Fillies Derby Ball hosted at the Louisville Marriot Downtown. This ball is one of the Kentucky Derby Festival’s oldest and most elegant events.

Themed “The Royal Ball,” the event promises to treat every guest like royalty. The event begins at 6:30 p.m. with cocktails, call to the post at 7:15, the Queen’s coronation at 7:30, all followed by dinner at 8:00. For dancing, live musical entertainment will be provided by The Sensations.

The highlight of the Derby Ball – which is planned and produced by The Fillies, Inc. – is the coronation of the Kentucky Derby Festival Queen, selected by the traditional spin-of-the-wheel.

The regal evening will be hosted by Vicki Dortch from WLKY TV with special guest Monte Durham, from TLC’s Say Yes to the Dress: Atlanta. Durham originally joined the Derby Festival in January to help select the five ladies that make up the Royal Court. At the Ball he will return to the festivities to help crown the Queen, along with Kathy Bingham, 2017 Fillies President.

Contributing Sponsors of the event include the Brown-Forman Corporation and Total Wine & More. Media Sponsors are TOPS Louisville and 102.3 The Max.

The Fillies Derby Ball is also the largest fundraiser for the Kentucky Derby Festival Foundation, KDF’s charitable arm. A portion of proceeds from the ball benefits the Foundation.