Last week, Gov. Matt Bevin ceremonially signed two pieces of recently enacted legislation that will improve the lives of children removed from their homes because of abuse or neglect.

House Bill 180 allows youth to be temporarily placed with non-relative adults who already have a significant emotional relationship with the child. House Bill 192 allows foster children to obtain their learner’s permits and driver’s licenses without the signature of their parent or guardian. 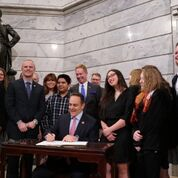 “These new laws will help to restore some much-needed normalcy to the lives of Kentucky foster youth,” said Gov. Bevin. “But today is about more than simply restoring normalcy. It’s about respect. It’s about dignity. And it’s about creating opportunity.”

Rep. Addia Wuchner, chairwoman of the House Health and Family Services Committee and primary sponsor of HB 180, noted that her bill provides adults with a family-like relationship to children the chance to play a larger role in their lives and gives the Cabinet for Health and Family Services (CHFS) and the courts another—less traumatic—option when children have to be removed from their homes.

“We all grew up with someone—a coach, a neighbor, a teacher, a friend’s parent or neighbor whose positive influence on us helped to guide us into maturity,” said Rep. Wuchner. “Sometimes those individuals are just like family and the closest thing to parents that kids have. In circumstances when a child is removed from a home, they can be a saving grace—a stabilizer that keeps a child from entering foster care and a series of tough transitions. ‘Fictive kin,’ as they are called, can be lifesavers. I am extremely proud that Gov. Bevin has such a commitment to Kentucky’s children, and I appreciate his support in signing this bill into law and his efforts to strengthen all families of the Commonwealth.”

Rep. Larry Brown, who was primary sponsor of HB 192, said that for too long, learning to drive has been one of many obstacles foster children face.

“At the point they are in out-of-home care, foster children have gone through so much trauma,” said Rep. Brown. “This new law will make life easier for them as they can apply for their driver’s licenses just like any other teenager. Foster kids have been asking for this for years. Thankfully, this legislature and this administration are listening to them.”

CHFS, the agency that administers the state’s adoption and foster care programs, says that almost 8,000 children are in state custody; and of these, more than 6,000 are in a foster care placement.

“Gov. and First Lady Bevin are leading the charge to make life better for vulnerable children in Kentucky,” said Sec. Glisson. “We are truly all working together as a team to ensure all children in the Commonwealth are safe, cared for and loved.”

Glenda Wright, a former foster child and current president of Voices of the Commonwealth (an advocacy group of both present and former foster youth) said that she knows firsthand the struggles to fit in as a foster child.

“As a child without a permanent family, you already feel remarkably different from the other kids,” said Wright. “These new laws can give children in out-of-home care both the sense of security that comes from a loving home and the promise of independence that comes with growing up. I appreciate Gov. Bevin and the legislators who made these new laws a reality.”

Gov. Bevin has pledged to improve the state’s adoption and foster care system by mobilizing a network of nonprofits, faith-based organizations and loving families through his “Open Hearts/Open Homes” initiative.

For details about how you can become a foster or adoptive parent or to obtain general information, please visit adopt.ky.gov or contact the Commonwealth at openhearts@ky.gov or 1-800-232-KIDS (5437).