Less than 2 weeks to GonzoFest Louisville 2017 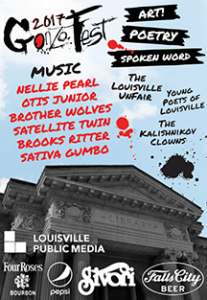 On Saturday, April 15, Hunter S. Thompson fans from all over will gather at the LFPL’s Main Library at 301 York St to celebrate the life, work, and legacy of the Gonzo journalist creator.  Expanded panel discussions, spoken word and poetry performances, and an all-local musical lineup set this year’s festival apart from previous years.

Journalist Michael Lindenberger will moderate the panel discussions and lecture.  All panels and spoken word performances will take place inside the Main Library.

GonzoFest Louisville will also feature an all-local lineup with music by Nellie Pearl, Otis Junior, Brother Wolves, Satellite Twin, Brooks Ritter, and Sativa Gumbo.  All bands will perform in the library parking lot on York St.  Juan Thompson, Hunter’s son, will be here as well, signing copies of his book Stories I Tell Myself:  Growing Up with Hunter S. Thompson.  Additionally, the festival will host a screening of Where the Buffalo Roam, the semi-biographical film based on the experiences of Hunter S. Thompson starring Thompson’s friend Bill Murray.  Dean Otto, Curator of Film for the Speed Art Museum, will introduce Where the Buffalo Roam.

The 2017 GonzoFest Louisville celebration is from noon until 8 p.m. on Saturday, April 15.  The festival will take place both on the exterior grounds of the Main branch and inside the library.  Admission is free, but attendees are encouraged to make a $10 donation when entering the festival.  A portion of the proceeds will benefit LFPL.