Enjoy Free Concert On Our Front Steps Every Tuesday In June 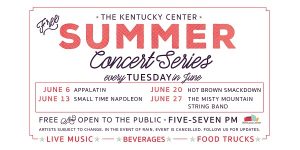