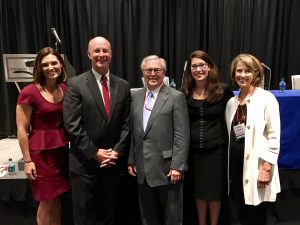 “Polling increasingly shows a disturbing and declining level of trust among Americans for public institutions like the judiciary and media,” said Grimes. “Earlier this year, my office released our Civic Health Index, a study revealing Kentucky ranks 48th in the nation for trust in media and public institutions. Our discussion today was important to identify causes and solutions for stemming the tide of distrust.”

Grimes noted that the proliferation of information sources make it easier than ever for citizens to seek news and commentary that affirms their political beliefs rather than informs them.

“If you hear something you don’t like in the media, or disagree with something from the courts, people now say, ‘They’re on the other team and the enemy’,” said Ball. “Some politicians have seized on that sentiment and use it to divide people.”

“The media is in a place to poke and ask questions and to create a pendulum of ideas. It is incumbent on the media to open the gates to keep the information flowing to the people. It’s the only way we’ll flourish,” said Meiners.

Minton, who has been traveling Kentucky discussing ways to strengthen citizens’ regard for the American judiciary, said minorities are more likely than not to have a distrust of the court system.

“There’s a firmly-held belief in the African-American community that courts are not fair to them. It raises the point that [the judiciary has] a trust deficit with certain segments of the population that we need to address,” said Minton.

Polling shows Americans have more confidence in their state courts than federal courts. Coffman said that’s due to people being more connected to their local judicial officials.

“State court judges are people who are our neighbors, maybe you go to church with them. If you put a human face on something, you are much more likely to trust it,” said Coffman. “Federal courts are reviewed as a little remote.”

The Civic Health Index showed only 46.5 percent of Kentuckians say they are a great deal or somewhat confident in the media. Ball said the media is partly to blame.

“[The media] has in some ways not done ourselves any favors. 2016 was the most substance-free election in terms of the coverage,” Ball said. “When people hear the rhetoric from politicians and then they turn on the TV and see the shouting matches, they believe the media isn’t working for them.”

“It’s a successful strategy [to say the media is fake]. But it’s cyclical. It’ll wear itself out,” said Meiners.

The panel agreed that media is instrumental in making sure the public understands the court system and how it works.

“When I came to the court, you had a press corps with a lot of knowledge about government and the courts. Now, most [reporters] don’t speak the language of the judiciary, and we have to teach them,” said Minton.

Coffman said most media approaches its reporting with trust in the judiciary: “In responsible media sources, you have an underlying belief in the rule of law.”

Grimes and the panel reiterated the important duty media and judiciary have in a healthy democracy.

“We all have a role to play in building up trust in our public institutions,” said Grimes.