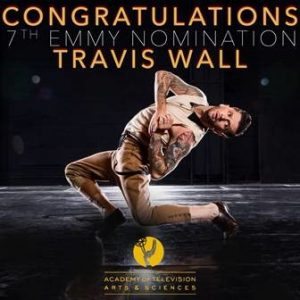 Travis Wall has been nominated for a stunning 7th consecutive Emmy Award for ‘Outstanding Choreography’ for his groundbreaking work on the popular FOX television show ‘So You Think You Can Dance’.  He was the Emmy winner in 2015.  He is nominated this year for routines ‘Send In The Clowns,’ ‘The Mirror’ and ‘She Used To Be Mine’.  Fellow nominees are Derek Hough, Fred Tallaksen, and Mandy Moore, who was nominated twice. The Emmy Award winners will be announced on the 68th Annual Emmy Awards Show, September 17 on CBS.

Travis Wall has become a leading presence in the world of commercial dance.  His dance company Shaping Sound this year launched their second show After The Curtain, following the spell-binding Dance Reimagined which toured North America for four years.

After The Curtain has received rave reviews, including the Los Angeles Times, who recently wrote: “Like a good film scene, this dance spectacle lingers after the curtain falls.”  And TheaterJones Dallas, who called the show “Overwhelmingly beautiful,” adding: “Seeing the show once isn’t enough to fully register the vastness of the production.”

According to Triangle Magazine, “After The Curtain is the pinnacle of contemporary dance!”  Conceived and choreographed by Travis Wall, the show tells the story of a man fighting to find his creative voice after the death of his one true love. Heart-wrenching, breath-taking, and ultimately uplifting, this is one dance show that audiences will remember forever. Travis Wall will be dancing in the show throughout the tour schedule, and he will be joined by his Shaping Sound co-founders Teddy Forance and Nick Lazzarini.

Travis Wall was the runner-up for the Fox reality show So You Think You Can Dance Season 2, and is currently a resident choreographer for the national dance competition show. He choreographed the music video for Carrie Underwood’s “Something In The Water”, which won the CMT Video of the Year, as well as stage shows for Justin Bieber and Demi Lovato. Additional TV credits include choreographing the 82nd Academy Awards, Disneyland’s 60th Anniversary Special on ABC, the 2010 MTV Video Music Awards and an episode of Pretty Little Liars featuring Maddie Ziegler. Feature Film credits include choreography for The Wedding Ringer starring Kevin Hart and the contemporary numbers for the feature film Step Up Revolution. He had the privilege of working with First Lady Michelle Obama on her Let’s Move campaign, creating the GimmeFive routine that was performed on Ellen and at The White House. Travis teaches with NUVO Dance Convention.