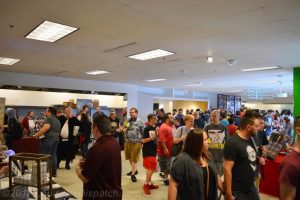 The first two full days of vendors, panels, and celebrity guests at Fandomfest 2017 are over, but there is still one more day to head out to the ComicCon.  The event has met with some challenges this year, but if they are preventing anyone – aside from several celebrity cancellations – from coming out to the event, it isn’t showing.  The aisles and meeting rooms of the Jefferson Mall Event Center, formerly Macy’s, are packed with attendees, costumed and otherwise.  Although the venue change was last minute, the new location offers many conveniences that were not previously available such as ample free parking and more affordable food options on site.

Attendees so far have been treated to a wide array of events, including a very interactive (and hilarious) Q&A session with Matthew Lillard, a trailer for an independent Star Wars film that will raise money for Norton’s Children’s hospital, Q&A panels with Paul Michael Glaser, Sean Gunn, and Brian Cummings, as well as more educational panels to help new authors, artists, and cosplayers, and much more.

There are plenty of vendors from all across the region sharing their art, books, toys, comics, memorabilia, costume pieces, and many other wares.  If you walk around long enough, you may even see amazingly detailed, fully functional R2D2 or BB8 droids wandering the aisles, courtesy of the R2D2 and BB8 Builders Clubs.

Today marks the last day of the three day event and there is stilt plenty to see and do.  There are more Q&A sessions including actors from the Kill Bill series, discussions about female superheroes, Supernatural, Star Wars, and Attack on Titan, a chance to see the aforementioned Star Wars trailer, and a children’s cosplay contest.  Doors open at 11:00 AM.