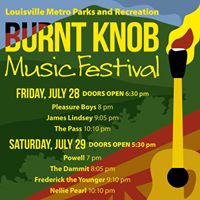 The festival is a celebration of local music and will feature seven acts over two nights, according to festival promoter Matthew Davis.

“It’s all about local. Local bands performing at an amazing local venue, with local sponsors and local food favorites,” Davis said. “These are awesome bands with great local and even regional followings, and $10 gets you in the door each night. It’s going to be a lot of fun.”

Custom brew by Falls City Brewing Company along with food from Festival Cuisine and Spirits and Lil Cheezers also will be highlighted during the festival.
“Local music and local beer have always been a perfect match. We’re beyond excited to be able to brew a limited release beer and team up with Iroquois Amphitheater to help support Louisville’s incredible music scene,” said Brian U’Sellis, Marketing Manager for Falls City. U’Sellis said that Falls City will be pouring a limited release beer – Iroquois IPA – during the show.

“We’re hoping that this becomes a new yearly tradition at the Iroquois Amphitheater,” Manager Mike Hallett said. “Two days of music, local food and beer – grab some friends and come out and enjoy a festival atmosphere at a really inexpensive price.”

The schedule is below. Admission is $10 per night. Tickets can be purchased at the gate or at iroquoisamphitheater.com.