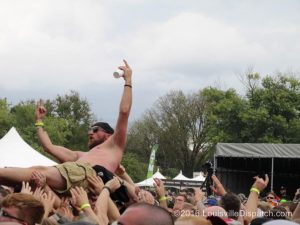 Louder Than Life will return to Champions Park in Louisville once again this year September 30th and October 1st. The two day festival will be returning for its fourth year of music, Gourmet Man Food, craft beer, Bourbon World, and more.

This year’s line-up will feature a variety of acts, including Lacuna Coil, Of Mice & Men, In This Moment, Halestorm, The Pretty Reckless, Eagles of Death Metal, as well as many other rock and heavy metal favorites.  Headliner performances Saturday night include Mastodon, Five Finger Death Punch, Rob Zombie and the Prince of Darkness himself, Ozzy Osbourne with Zakk Wylde. Sunday’s feature performances will be Stone Sour, Rise Against, Incubus, and Prophets of Rage.  Full details of the line-up are available on the website.

Tickets are currently available online ranging from single-day GA tickets starting at $69.50 to entire festival weekend VIP experiences that include hotel for up to $1450.