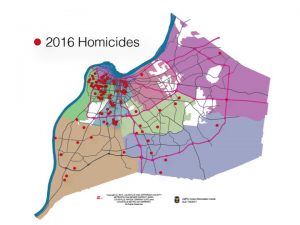 Speaking to hundreds of community and civic leaders during an I Am Ali Festival event this evening, Mayor Fischer outlined the many factors contributing to a recent spike in homicides in Louisville and the nation’s other largest cities — including gangs, drugs and an unprecedented number of guns on the streets.

Intertwining data, graphics, photos and videos of people ranging from former Mayor Charles Farnsley to Muhammad Ali, the Mayor discussed the contributors to crime, including racial disparities that create concentrated poverty, which in turn creates despair.

And he outlined the city’s comprehensive violence prevention strategy, which has been reviewed and endorsed by national experts and keys on six pillars:

The Mayor began by saying that in visits throughout the city, he hears people celebrating Louisville’s strong economic development position, but expressing concerns about the spike in homicides. People usually ask one of three questions, he said:

Noting that violent crime and homicides are on the rise in roughly 60 percent of America’s largest cities, the Mayor said, “Like cities all over the country, we are trying to identify why homicides are up and how we can reduce them.”

And he pointed to several key factors, including gangs involved in the illegal drug trade.

“The rise in homicides coincides with a significant shift in the illegal drug economy,” he said. “Closing down the pill mills made opioids more expensive. That fueled the heroin market. And when competitors in this economy have disputes over territory or market share, they don’t sue each other.  They use violence that often ends with one or more of those involved dead, in the hospital, or in jail.”

Combine that with an unprecedented number of guns on the streets, he said, and we’re seeing too many people “turn to guns to settle personal disputes, some of which get started or get worse on social media.”

The Mayor also outlined the racial disparities, historic and current, that have contributed to the spike in violence.

“For our city to reach its full potential, we have to look at our history, with open eyes and focused minds to create a more constructive way forward – for everyone,” he said.

What are you doing about it?

The Mayor detailed the city’s violence prevention strategy, which includes providing LMPD with the support it needs to get the most violent criminals off the streets.

He said the city is investing in hiring additional 55 new LMPD positions in the last year, bringing the police force to an all-time high in terms of manpower, with just under 1,300 officers. LMPD is participating is federal task force with agencies like the FBI, DEA, U.S. Marshal, ATF, and U.S. Attorney’s Office to arrest and prosecute the most dangerous criminals. And the 9th Mobile Division is focusing on narcotics, gangs and guns.

The Mayor also noted that he continues calling for common-sense gun laws from Frankfort that respect the rights of lawful gun owners while making it harder for criminals – and children – to get their hands on guns.

Beyond law enforcement, the Mayor outlined some of the hundreds of ways that the city, including the Office for Safe and Healthy Neighborhoods, is working to stop violence before it starts, through the other pillars of intervention, prevention, community mobilization, organizational change and re-entry.

He also cited the challenge that local governments face as state and federal governments reduce their level of support for programs like urban housing, transportation and education, even as the needs grow.  And he called on state and federal leaders to “make a national commitment to our communities here at home, where we lose 14 young African-American men and boys every day to violence.”

What can I do?

In the wake of prejudice and pain, Muhammad Ali “found strength, support and community in his faith, and in his sport, where a compassionate police officer, Joe Martin, introduced him to the world of boxing,” the Mayor said.

(Find ways you can help)

He outlined opportunities for citizens, businesses, faith groups and others to help meet the challenge, one person at a time, and then he closed with a video of highlights from Ali Week that he said showed “the spirit of Ali.”

“Let’s capture that spirit. Let’s nurture it in all our children.  Ali’s story is far from over. And ours is just beginning,” he said. “Let’s a write a new chapter in the history of Louisville. One where everyone in every neighborhood has an open path to greatness.

Please join us. Be the One.”