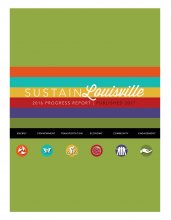 From decreasing the amount of garbage put into the landfill to increasing the number of electric TARC buses and beginning work on recommendations in a groundbreaking urban heat study, Louisville Metro Government and its partners have made important environmental strides in the past year, according to the city’s annual Sustain Louisville progress report.

The report, released today, summarizes achievements that occurred in 2016 and updates the public on projects that are planned or underway.

“We continue to make progress on our sustainability goals, and I commend Metro agencies, business owners, faith leaders, residents and individuals for their efforts to make Louisville a more sustainable city,” Mayor Greg Fischer said. “But we have much more work to do to become a city that is healthier, cleaner and more attractive for visitors and businesses, as well as for residents.”

Two key city actions on sustainability in 2016 were signing onto the Global Covenant of Mayors, in which Louisville joins cities around the world in committing to reduce contributions to climate change and plan for its impacts; and the release of Louisville’s Urban Heat Management Study, the country’s most comprehensive urban heat study to date, which provides a framework for developing urban heat management strategies.

The Sustain Louisville plan, developed with input from the community and was released in March 2013, presents a comprehensive approach to accelerate city-wide sustainability accomplishments. Focus areas include energy, environment, transportation, economy, community and engagement.

Other 2016 successes in the fourth-year progress report include:

Since Sustain Louisville’s release in 2013, progress has been made on several goals, including increasing landfill diversion rates. Diversion rates for all sectors citywide have increased from 48 percent between 2008 and 2011, to nearly 53 percent between 2013 and 2016. Louisville’s urban bike network has increased by nearly 100 miles of bike lanes and shared lane miles since 2013.

The purchase of local food by institutions has increased from $150,000 in 2011 to $1.1 million in 2016. MSD has continued to implement programs and projects with a goal to provide safe, clean waterways in Louisville Metro, and has been able to help remove seven impairment parameters on stream or Ohio River segments on the Kentucky Division of Water’s impairment list since 2010.

Sustain Louisville has evolved since its release, now featuring 17 goals and over 80 initiatives.

“The Office of Sustainability and its partners have been laying the groundwork for several major projects over the past few years, and I’m proud that they came to fruition in 2016,” said Maria Koetter, Director, Office of Sustainability. “The Urban Heat Management Study was completed and will help us effectively reduce temperatures citywide; Metro Council allocated funding for a greenhouse gas inventory and for developing a plan to help mitigate climate change impacts; and the Division of Community Forestry, along with many partners, used the 2015 Tree Canopy Assessment findings to make progress on increasing our tree canopy. I look forward to continuing work with our partners to help achieve even more success in the year ahead.”