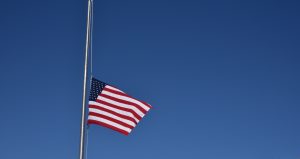 In accordance with the proclamation by United States President Donald Trump, and with respect for those who lost their lives in the Las Vegas massacre, Governor Matt Bevin has directed both American and state flags at all state office buildings be lowered to half-staff beginning immediately until sunset on Oct. 6 to honor the victims and their families.

“What happened in Las Vegas was the handiwork of unadulterated evil in its vilest, most despicable form,” said Gov. Bevin. “Kentucky stands in solidarity with the citizens of Las Vegas and with all Americans in defiance of any act of terrorism against the citizens of our country. Today, and in the days to come, we will give thanks for the quick, decisive acts of first responders that prevented further tragedy. We mourn the lives that were lost, and we will honor their memory. We will pray for the families and friends of those who lost loved ones, and for those recovering from injuries sustained as the tragedy unfolded. We will not allow fear to rule our hearts—evil will not triumph against us. United we stand. Divided we fall.”

Gov. Bevin encourages individuals, businesses, organizations and government agencies to join in this tribute of lowering the flag to honor the victims and families of the Las Vegas shooting.