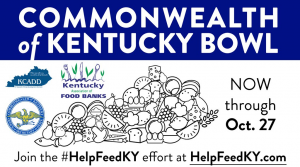 The Commonwealth of Kentucky Bowl food drive is a friendly competition between Kentucky’s 15 area development districts in support of the Kentucky Association of Food Banks with a goal to raise 400,000 pounds of food or $50,000 in honor of the 50th anniversary of the state legislation that created the Area Development Districts.

“More than 700,000 Kentuckians don’t always know where they’ll get their next meal,” said Grimes. “That’s a stunning and heartbreaking number. We have to do everything we can to make sure no citizen of this Commonwealth faces hunger.”

Kentuckians can donate through Oct. 27. Donations and monetary contributions are being accepted by each area development district, and they will remain in the communities where they are given. $1 is equivalent to 8 pounds of food. Anyone can contribute at HelpFeedKY.com.

Grimes made visits to several area development districts over the last few weeks to discuss the vital need for hunger relief in Kentucky. She has been a champion for solving Kentucky’s hunger issues since she took office in 2012 and before she was elected to public office. As Secretary of State, Grimes was a vocal advocate for Farms to Food Banks, a law giving tax credits to farmers who donate to food banks. She is a longtime volunteer at the Salvation Army, serving the Thanksgiving meal at her local service center every year. She also has served on the board of God’s Pantry Food Bank in Lexington.

More information on the Commonwealth of Kentucky Bowl is at HelpFeedKY.com.