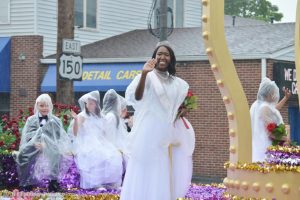 The Kentucky Derby Festival is looking for participants for next year’s Republic Bank Pegasus Parade. 2018 marks the 63rd annual parade, which will march down Broadway on Thursday, May 3. The application process for groups interested in participating in the parade opens online today.

Click here to see photos from the 2017 Pegasus Parade.

The Festival is looking for participants in the following categories: Equestrians, Specialty Unit, Marching Band, Inflatable and Float. Parade Participation Guidelines and Applications can be downloaded at KDF.org/PegasusParade. The application deadline is January 31, 2018. For more information about participating in the parade, contact Event Manager Zach Fisher at (502) 572-3853 or zfisher@kdf.org.

The Pegasus Parade – the Derby Festival’s oldest founding event – is one of nearly 70 events produced by the Kentucky Derby Festival in the spring and provides an estimated economic impact of more than $22 million. Each year, the annual spectacle steps off at 5 p.m. and marches west on Broadway from Campbell to Ninth Street.

Republic Bank is the Title Sponsor of the parade with Contributing Sponsor, KentuckyOne Health.