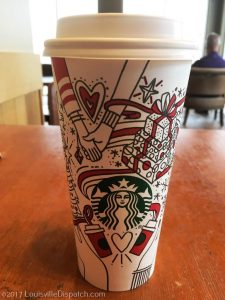 Starbucks unveiled their 2017 holiday cups yesterday and fans of the annually-changing designs may have noticed something missing:  color!

Since 1997, the Seattle based coffee giant has welcomed the holiday season with a cheerfully themed red cup.  Now, after 20 years, this season’s cup has arrived nearly colorless.

The 2017 Starbucks holiday cup still features a seasonally themed illustration complete with a Christmas tree, a stack of gifts, clasped hands, hearts, stars, peace doves, ornaments, snowflakes, hot cocoa, and more.  The design has some basic colors, a few red parts and the company’s signature green on their logo, but a Starbucks representative said that the line-art cup was intended to allow people to add their own color to their cup.

Perhaps meant to capitalize on the recent adult coloring craze, or to spark creativity among their caffeinated customers, or  maybe just to save money on ink, the design captures the spirit of the holiday season while, hopefully, avoiding some of the controversy that the chain has endured on social media in previous years for swinging too far into the politically correct camp with their cups.

Two years ago, the company faced backlash after trying to avoid the “Happy Holidays” vs “Merry Christmas” type of holiday havoc by releasing plain red cups to mark the season.  Last year, they went the opposite direction by releasing more than a dozen holiday themed designs inspired by customer creations.

Along with the DIY artwork cup this season comes the “Give Good” sleeve to protect hands from the hot contents.  This slogan encompases the theme for this year’s holiday campaign, which Starbucks executive creative director, Leanne Fremar, says “as small as someone opening the door for you, or recognizing the people that enrich your life – your child’s teacher, a caregiver, a family friend.”  Fremar continued, “the holidays are a time to celebrate all the good we give to each other and our community.” 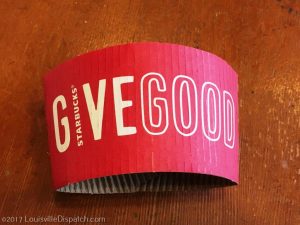 The Give Good campaign site reads

Hold the door for someone,
connect over coffee,
say “hi” to a stranger,
give perfect gifts
to the ones you love.
And once good starts,
it keeps going and growing
from one person to the next –
simple acts of kindness
that touch the lives of many.
Because good is contagious,
and giving is too.