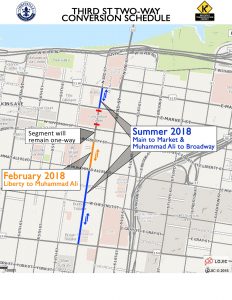 The conversion of portions of Third Street from one-way to two-way will begin with prep work the week of February 19 and completion targeted for early March (weather permitting). This conversion project also includes repaving of the street.

The project, which is part of the city’s MOVE Louisville plan to convert one-way streets to two-way, is designed to increase safety, mobility and circulation for motorists and pedestrians, while also boosting visibility for businesses and increasing retail activity.
The conversion will be divided into three phases, starting with the portion from Muhammad Ali Boulevard to Liberty Street. That work includes the installation of a temporary traffic signal at Third and Liberty streets. A permanent traffic signal will be installed this summer.
The second and third phases of the work, from Main to Market streets, and from Muhammad Ali Boulevard to Broadway, will occur this summer.
To ensure pedestrian and motorist safety around the Kentucky International Convention Center, Third Street from Market to Liberty will remain one-way. Third Street from River Road to Main Street is already two-way and will remain two-way.
In preparation of this conversion, two public meetings were held at Louisville Slugger Field in fall 2017, and numerous meetings have been held with various stakeholders and property owners along Third Street.
The city will continue to review one-way streets throughout the community for potential conversion to two-way operations. Additional streets planned for conversion will be announced later this year.
For more information on converting downtown and edge neighborhood streets to two-way, please visit https://louisvilleky.gov/government/advanced-planning/two-way-street-con…