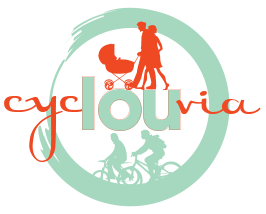 CycLOUvia, the popular event showcasing alternative transportation, is returning to Frankfort Avenue for the fifth time on Sunday, June 24, Mayor Greg Fischer announced. Frankfort Avenue from Pope Street to Stilz Avenue will be closed to vehicular traffic from 2-6 p.m. Police will facilitate a motor crossing at Ewing Avenue. Many businesses along the corridor will be open and engaging the street with specials for the event.

“On a gorgeous Louisville summer day, CycLOUvia is a great event to get outside and spend time with friends and family in the street on your bikes,” Mayor Greg Fischer said. “Join us on Frankfort Avenue and don’t forget to support the thriving small businesses while you are there.”

CycLOUvia is designed to encourage more communities to close streets to cars and open them to people. The return to Frankfort Avenue marks the thirteenth CycLOUvia event, with previous events being held on Bardstown Road, West Broadway, and Three Points (Germantown, Schnitzelburg and Shelby Park).

Commercial establishments with frontage along the Frankfort Avenue corridor are encouraged to open their businesses during event hours and engage participants to create an atmosphere that is uniquely Louisville.

CycLOUvia is Louisville’s opportunity to experience transportation in a unique atmosphere, by walking, cycling, skateboarding, or dancing in the street.

Streets account for a significant amount of public land in all cities. CycLOUvia repurposes these public spaces by temporarily replacing traditional vehicular traffic with pedestrian traffic. During CycLOUvia, streets become paved parks where people of all ages, abilities, and socio-economic backgrounds can come to improve their mental, physical, and emotional health.

Since 2012, CycLOUvia events have attracted tens of thousands of people to various neighborhoods across the city. In addition to being part of the Mayor’s Healthy Hometown Movement, CycLOUvia promotes healthy lifestyles, alternative transportation, bike/pedestrian safety and economic development.