State And City Officials Report On Hepatitis A Outbreak 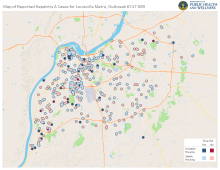 Kentucky’s current hepatitis A outbreak is now the biggest outbreak in the United States and the biggest ever recorded in both Kentucky and Louisville. As of July 7, the outbreak had struck 65 Kentucky counties with 1,094 hepatis A cases and 8 deaths.  As of July 17, Louisville had 540 cases with 4 of the state’s 8 deaths.  While the outbreak continues to grow and spread throughout the state, there is evidence that it may be declining in Louisvil

State and local officials urge everyone in Louisville and in any county in Kentucky that is part of the current hepatitis A outbreak to get immunized.  They also remind everyone to practice good hand hygiene, particularly after using the restroom and before eating or preparing food.

New hepatitis cases per day have been trending downward in Louisville since April with 4.1 in April, 3.8 in May, 2.5 in June, and so far, 1.67 in July.  “While there is evidence that new cases may be trending downward in Louisville,” said Dr. Sarah Moyer, director of the Louisville Metro Department of Public Health and Wellness, “this no time to get complacent.  Anyone can get hepatitis A during this outbreak.  It is being spread through person to person contact.  The best ways to protect yourself and others are to get vaccinated and wash your hands often with soap and warm water.”

Health officials stressed that the virus in this outbreak is being passed person-to-person.  There has been no evidence that it is being spread by food or drink as was the case during the hepatitis A outbreak that struck Louisville in 1988.  The outbreak remains centered primarily among those who use illegal drugs and among the homeless; however, about 10% of cases do not fall into either of those group

“It’s been gratifying to see the Louisville Metro Department of Public Health and Wellness and local public health departments across the state coming together to combat the outbreak,” said Dr. Jeffrey Howard, commissioner of the Kentucky Department for Public Health.  “Our surveillance and the fact that we’ve hospitalized about 60% of all cases has kept our death rate below that of other states experiencing hepatitis A outbreaks.”

In Louisville, 63% of the people (337 out 536) who were infected with hepatitis A have been hospitalized.  Across the state, there have been eight deaths, including four in Louisville.  The genetic fingerprint of the hepatitis A virus Louisville and in Kentucky matches outbreaks in San Diego California and Salt Lake City Utah.

“Louisville has done a superb job in rolling vaccine out to the homeless and the drug-using populations,” said Doug Thoroughman of the Centers for Disease Control and Prevention.  “They are the gold standard of how to respond to an outbreak of this kind.”

More than 78,000 hepatitis A immunizations have been given locally in response to the current hepatitis A outbreak, more than 16,000 by the Department of Public Health and Wellness alone.  Massive immunization and outreach efforts among the homeless in shelters, camps and at health facilities that serve the homeless in the early stages of the outbreak has limited the spread of hepatitis A among that population.

“I can’t overemphasize the importance of protecting yourself and others from hepatitis A by getting vaccinated,” said Dr. Moyer.  “This vaccine is very well-tolerated. Most insurance plans cover the cost and there are ways those who are uninsured can get immunized for little to no cost.  The outbreak will stop when most people living in Louisville are protected through vaccination.”

On November 21, 2017 the Kentucky Department for Public Health declared an outbreak of acute hepatitis A in multiple counties throughout the state.  Hepatitis A is a vaccine-preventable, communicable disease of the liver caused by a virus. It is usually transmitted person-to-person through the fecal-oral route or consumption of contaminated food or water. Most adults with hepatitis A symptoms may experience fatigue, low appetite, stomach pain, nausea, or jaundice, that usually resolve within 2 months of infection; most children less than 6 years of age do not have symptoms or have an unrecognized infection. Antibodies produced in response to hepatitis A infection last for life and protect against reinfection. The best way to prevent hepatitis A infection is to get vaccinated.

Additional information and a list of places in Louisville to get vaccinated can be found at https://louisvilleky.gov/government/health-wellness/hepatitis or by calling 211.