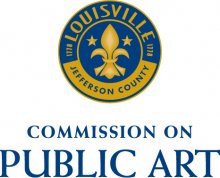 President David James (D-6) and several Members of the Louisville Metro Council on Thursday, October 10th officially unveiled the 2019 Edition of the “Art in City Hall” Exhibit which features the work of Louisville Visual Artists.

“There was a very positive response throughout the year when the public got the chance to see the wide range of artists and visual talent, we have in Metro Louisville,” says President James. “Art in City Hall will once again allow us to showcase beautiful works of those artists in an historic setting.”

“Art in City Hall” works in partnership with the Commission on Public Art to use the public lobby areas and hallways of all three floors in Historic City Hall as a display area to showcase these visual arts.

“We are excited to welcome an amazing group of Louisville artists to exhibit their work at City Hall. This is a wonderful opportunity to experience visual art in a civic building where the community gathers and shares dialogue,” said Sarah Lindgren, Public Art Administrator for Louisville Metro Government.

Louisville has a strong history of arts and cultural expression. When City Hall was built in the 1870s artists and craftsmen created a detailed façade including a locomotive with billowing steam and animals to represent the city’s identity and economic strength. Now, 150 years later, we still look to artists to communicate the distinctive identity of our city with many creative voices.

Over the summer, two members of the Louisville Metro Council, Councilwoman Paula McCraney (D-7) and Councilman Anthony Piagentini (R-19), volunteered to be part of a committee to review works of visual artists for the program.

“I was honored to serve on this year’s selection team. Art is a unique expression of an artist’s complex imagination. Artwork has different meanings to different people, and it will be interesting to hear comments throughout the year about how these chosen pieces speak to the heart and soul of employees and City Hall visitors,” said McCraney.

“Louisville is home to so many great artists such as our musicians, actors and ballet company to our visual artists who we recognized today.  Our use of City Hall to share these wonderful works is an excellent way to remind the public that it is government’s job to create a safe and vibrant city so that all of our citizens have the liberty and freedom to enjoy the beauty and majesty of great art,” said Piagentini.

Those artists in the exhibit are:

“Art in City Hall is a yearlong exhibit. The Council is honored to be part of an effort that we hope it continue in the coming years as we join many areas where Louisville artists show their talent and remind us that the arts have a very important place in our society,” said President James.

To learn more about Metro Louisville’s Commission in Public Art and its mission, go to: https://louisvilleky.gov/government/public-art/commission-public-art