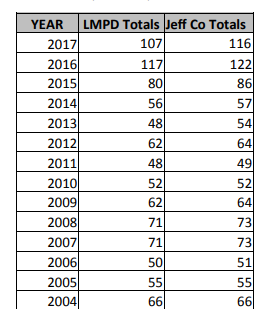 Under the new initiative, prosecutors in O’Connell’s office will request that all repeat offenders for driving under the influence (DUI) wear alcohol-sensing anklets for varying periods of time to ensure that they aren’t drinking. The anklets, produced by SCRAM Systems, automatically test a subject’s perspiration every 30 minutes for alcohol consumption.

The 24-hour monitoring is designed to help individuals address their alcohol issues and reduce the chances that they will reoffend. The Jefferson County Attorney’s office will also recommend CAMP for certain alcohol-involved domestic violence cases and for first-time DUI offenders with a blood-alcohol level of 0.15 or greater that also have an additional serious aggravating factor. Aggravators would include multi-vehicle crashes or those that involve bodily injury or death, a driver under the age of 21, or having a minor-age child in the car at the time of arrest.

In addition to keeping roads safer from impaired drivers, O’Connell stressed the focus on rehabilitation with CAMP.

“The use of this alcohol-sensing technology can absolutely save lives,” O’Connell said. “This is an effort to use the accountability of the courts as a path toward sobriety. The longer a person is able to stay sober, the greater the chance that they will not commit a DUI or other alcohol-involved crime.”

Depending on the case, CAMP might be recommended while a defendant is awaiting trial, entered as a condition of a plea agreement, or both. The program could also conceivably cut city costs by allowing certain offenders to avoid jail days if they agree to continuous monitoring and demonstrate that they take their offense—and their alcohol misuse—seriously and are addressing the issue.

Offenders will pay for the monitoring with planning in place to help people who are indigent and cannot afford the costs. Monitoring costs nationwide average $10-12 a day. SCRAM Systems claims that former clients have self-reported spending on average about $14 per day on alcohol prior to wearing the bracelet. The office of the Jefferson County Attorney receives no money from the program.

Monitoring technology and services will be provided locally by Bluegrass Monitoring, which has monitored more than 9,200 individuals through similar efforts in the region as Ohio Alcohol Monitoring Systems.

Seminars are set for August 14-16 at the Louisville Bar Foundation to educate members of the local legal community, including judges and members of the defense bar, about the program.

CAMP is the latest tactic that O’Connell has promoted that uses the leverage of the court system to have a positive impact on addiction. His office has been instrumental in forming and supporting the Jefferson County’s Drug Treatment and Veterans’ Treatment Courts, and he has supported the use of Casey’s Law in Kentucky, which allows parents, spouses and others to seek the court’s assistance to order their loved one into treatment for drugs or alcohol.

Crime Down 4 Percent In Louisville For First Half Of 2017

Louisville has experienced a 4 percent drop in crime overall for the first half of 2017, with declines in all eight LMPD divisions and in every category except homicides, Mayor Greg Fischer and Chief Steve Conrad announced today.
(See Louisville crime data for 2017.)

Violent crime overall is down 5 percent.

Property Crime is down 3.7 percent

“This data is clear – with the exception of homicides, we are headed in the right direction for every category of crime,” Fischer said.

The Mayor said the data shows there were 658 fewer crimes in Louisville for the first half of the year, an overall 4 percent reduction.  “That is 658 fewer citizens who were victims in Louisville,” he said.

And the declines are being seen across all eight LMPD patrol divisions:

Chief Conrad credited the entire LMPD team, from the command staff to the patrol officers, for work that is making a difference in the city.

“The entire force at LMPD is here to protect and serve the citizens, and I’m proud that we are having an impact,” Conrad said. “We will continue to work our plan, with a key focus on reducing homicides and getting the crime-fighting resources to the neighborhoods that need them most.”

Fischer and Conrad both cautioned that, although the six months of data shows positive signs, there is still tremendous work ahead to make Louisville one of America’s safest large cities. “But we are committed to making that happen,” Fischer said.

Scott Louis Craven, 35, of Louisville, has been charged with one count of prohibited use of an electronic communication system for the purpose of procuring a minor for a sex offense, a Class D felony.

The work of the Cyber Crimes Unit, a division of the Department of Criminal Investigations in the Office of the Attorney General, is part of Beshear’s core mission to keep sexual predators away from Kentucky’s families and children.

“The Attorney General is the chief advocate and protector for our Kentucky families, and it’s our job to ensure our communities are safe by taking off the streets anyone who would exploit children,” Beshear said. “I want to thank LMPD and KSP for working with my office on this case.”

Craven was to be arraigned in Jefferson District Court May 2. His cash bond is set at $10,000. 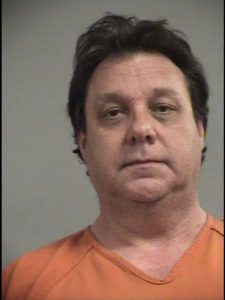 Robert L. Tomlinson, 55, of Louisville, has been charged with one count of prohibited use of an electronic communication system for the purpose of procuring a minor for a sex offense, a Class D felony.

According to Beshear’s cyber investigators, Tomlinson became the subject of an investigation after seeking sex with a minor and asked for sexually explicit photos of a minor.

The work of the AG’s Cyber Crimes Unit, a division of the Department of Criminal Investigations, is part of Beshear’s core mission to keep sexual predators away from Kentucky’s families and children.

“The Attorney General is the chief advocate and protector of Kentucky families, and my office’s job is to ensure our communities are safe by taking off the streets anyone who would exploit children,” Beshear said. “I want to thank our cyber investigators, Chief Conrad and his officers, and the Secret Service for working on this case.”

Tomlinson was transported to Louisville Metro Corrections where he remains on a $10,000 full cash bond. He is scheduled to appear in court April 14.

Beshear’s Cyber Crimes Unit partners with federal, state and local agencies to further their ongoing efforts in Operation Shielded Child, which targets those who would seek out children for sexual exploitation and those who promote the ongoing proliferation of child pornography. 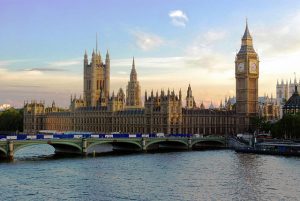 At least four people, including a suspected attacker and a police officer, have been confirmed dead in an attack near the British parliament that authorities are treating as a terrorist incident.

“Although we remain open minded to the motive, a full counterterrorism investigation is already underway,” Commander BJ Harrington told a news conference Wednesday in London.

A search is underway to confirm there are no additional attackers, though police officials have indicated the attack was carried out by a lone assailant.

Parliament was placed on lockdown after an attacker stabbed a police officer before being shot by other officers on the parliament grounds. The injured officer later died of his injuries. At least two people were killed and eight others injured when a vehicle struck several people on the nearby Westminster bridge.

A senior police officer told VOA that they believe only one assailant was involved in what appears to have been “a three-staged attack.”

It began with an SUV being driven over Westminster Bridge right by the House of Commons. The SUV mounted the sidewalk and struck several pedestrians.

We were called at approx 2:40pm to reports of an incident at #Westminster Bridge. Being treated as a firearms incident – police on scene

According to police sources, the vehicle struck some other pedestrians at the perimeter fence near the gates at Old Palace Yard.

“The attacker then rushed the gates and struggled with a police guard who tried to stop him. The assailant stabbed him several times,” the senior police officer said. “Other officers shot the attacker.” 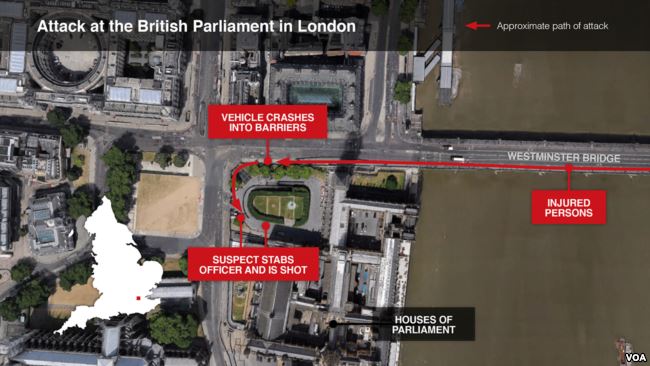 The gunfire was heard at 2:38 p.m. London time inside the House of Commons as lawmakers were debating legislation on pension reform. Eyewitnesses say about half-a-dozen shots were fired.

“It all happened within a minute,” witness Tawhid Tanim told VOA. “I came out of where I work and saw a car had pulled up and I heard I just heard bang bang bang and people running everywhere.”   END_OF_DOCUMENT_TOKEN_TO_BE_REPLACED

Current Kentucky law requires anyone who suspects that a child is being abused to report it to police, the state Cabinet for Health and Family Services or the county or commonwealth’s attorney. The law does not, however, require a local police department to report to other agencies when one of its officers is suspected of child abuse.

“This state law is intended to protect our children by requiring citizens to speak up to authorities when they reasonably believe a horrible crime is being committed against a child,” Mayor Fischer said. “This legal requirement should be extended to law enforcement agencies as well when the suspicion falls on one of their own, to ensure that all due diligence is taken to protect our young people.

“I’m calling on state lawmakers to take immediate action in the upcoming final days of this legislative session.”