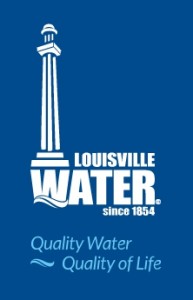 As part of the partnership, the visitor experience at Stitzel-Weller now includes an exhibit on how the bourbon industry benefits from water step-by-step … from the crops, the fermenting process and bottling, to how the bourbon is served.

Louisville Water, for its part, will expand its involvement in many of the community’s bourbon-related events and attractions where water is served.  The company also will add a special tour at its WaterWorks Museum that highlights the bourbon and water connection.

“This new partnership is another part of the growth and evolution of Bourbonism in our city,” the Mayor said. And it reflects a very old alliance between two of Louisville’s most recognized products – bourbon and water.”

Louisville Water’s history with Stitzel-Weller also is a long one. The company first provided fire protection to Stitzel-Weller in 1937 and then a supply line in 1944.

“The bourbon industry is an important part of our daily production of 115 million gallons of drinking water,” said Spencer Bruce, President and CEO of Louisville Water. “Our water’s great taste supports the bourbon flavor, whether it’s a drop of water or a rock in the drink. And water is the only ingredient that can be added to the bourbon once it leaves the barrel and goes into the bottle, so in that way Louisville Water is enjoyed by millions worldwide.”

For distillers, Louisville’s water provides a great base to start the distilling process.

“Beyond the distilling, we serve Louisville’s water in the tasting room.  It’s a key ingredient as a visitor samples our bourbon – as air is to wine, water is to bourbon,” says Kevin Didio, manager of the Bulleit Frontier Whiskey Experience at Stitzel-Weller.   “And beyond that, serving water alongside our great brands is part of our commitment to a socially responsible experience.”

The Louisville Water Works and Pumping Station and a historic section of downtown Louisville are subjects of three historical markers that the Kentucky Historical Society (KHS) will dedicate in early March.

A new marker at the Water Tower will recognize the contributions of George Warren Fuller to Louisville’s modern water filtration system. Fuller, now known as “the father of sanitary engineering,” conducted the first scientific testing of water filtration at the site between 1895 and1897. The data he collected led to a three-part system that includes sand and gravel filtration. This system purified Ohio River water so well that when filtering began in 1909, the number of deaths from typhoid fever declined by 60 percent. Fuller’s purification system formed the basis of modern water filtration. The Louisville Water Co., sponsors the marker.

A second marker will be unveiled at the same event to replace one previously at the site. It tells the story of the Louisville Water Co., pumping station and water tower. Both have been National Historic Landmarks since 1971. Friends of the Water Tower sponsor this marker.

A third new marker tells the history of a section of the Shelby Park neighborhood which C.P. Moorman, a distiller, developed between 1884 and 1885. It includes Italianate residences, Queen Anne row houses and commercial buildings.

The reverse side of the marker pays tribute to Mason Maury (1846-1919), a prominent Louisville architect credited with building the neighborhood. Maury was a Louisville native known for his use of the “Chicago School” design style. He began his career around 1880. By 1902, he had more than 700 buildings to his credit. Among his notable designs are the Kaufman-Straus and the Louisville Trust Building. The Shelby Park Neighborhood Association sponsors the marker.

More than 2,400 historical markers statewide tell Kentucky’s history. More information about the marker application process and a database of markers and their text is available at history.ky.gov/markers. Also available on the site is the Explore Kentucky History app, a source of supplemental information about marker topics and virtual tours of markers by theme. KHS administers the Kentucky Historical Marker Program in cooperation with the Kentucky Transportation Cabinet.

The Louisville Water Company failed to read one of the meters in the KFC Yum! Center for the past four years. The result is the approximately $100,000 worth of water and sewer charges were not collected. The error is the result of an incorrectly submitted application that the arena filed which placed the meter under the water company’s watch.

A company policy does not allow the water company to pursue charges that over two year past due, but they were able to collect about $38,500 after negotiations with the Louisville Arena Authority, less than half of what the charges for the past two years totaled.

Louisville Metro Council President, David Tandy, believes the arrangement is reasonable since the water company recovered some of the money it was owed and the arena was not forced to pay a bill it was not expecting.