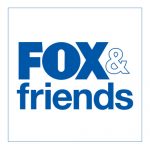 Christi’s Cafe will be hosting a live segment of the nationally broadcast “Fox & Friends” program next Wednesday morning.

The restaurant, a staple of Southwest Louisville at 12810 Dixie Highway in Valley Station, will be open at the usual 6AM time for breakfast but, in addition to a delicious breakfast, guests will be treated to a live television experience – not only as a spectator, but also with the opportunity for an on air appearance to discuss current events on the top rated morning show between 6 and 9 AM.

Christi’s Cafe is operated by Valley Station native Christi Druin who opened the restaurant in 2006 after spending years as a server herself.  Since then, the family-run business has grown to become an area favorite for regulars as well as new visitors.  Druin has great passion for her community, which shows through in her charitable work with local organizations like Shirley’s Way and others.

During the live remote segments, restaurant patrons will have the opportunity to discuss their opinions on current news stories, politics, and more with Fox News personalities in the restaurant as well as the hosts on the “Curvy Couch” back in the New York studio and the show’s more than a million viewers.