Hurricane Florence Closes In on US East Coast 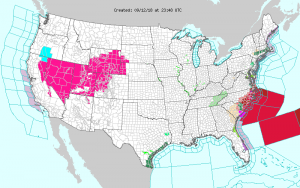 Emergency officials on Wednesday urged millions of residents along the southeastern U.S. coast to finish preparations ahead of Hurricane Florence, which is expected to unleash damaging winds and life-threatening amounts of rain when it makes landfall this week.

Florence was at last report a Category 3 storm with maximum sustained winds of 195 kilometers (121 miles) per hour. Although it weakened slightly Wednesday afternoon, forecasters do not expect Florence’s strength to change much before it comes ashore near the North Carolina-South Carolina border.

The massive system was about 700 kilometers (435 miles) southeast of Wilmington, North Carolina. The National Hurricane Center said Florence was “forecast to be an extremely dangerous major hurricane when it nears the U.S. coast late Thursday and Friday.”

“This is not going to be a glancing blow,” the Federal Emergency Management Agency’s Jeff Byard said in Washington.

The governors of the Carolinas, Virginia, Maryland and Georgia all declared states of emergency.

Byard again urged residents in danger zones to heed warnings to either evacuate or hunker down. “There will be disruptions in our services,” he said. “The power will go off. Infrastructure will be damaged. Homes will be damaged or destroyed. So, again, the time to act is now.”

There was particular concern about the storm lingering once it nears the coast and moves onshore, allowing it to dump torrential amounts of rain in parts of North Carolina, South Carolina and Virginia. That happened last year when Hurricane Harvey dumped more than 150 centimeters (60 inches) of rain on the Houston, Texas, area.

Forecasters at the hurrican center warned that as much as 101 centimeters (40 inches) of rain could fall on some parts of North Carolina, with a storm surge of up to 4 meters (13 feet).

Along with the high winds and storm surge, forecasters are very concerned that Florence could be a slow-moving storm. It could linger along the Atlantic Coast, dumping massive amounts of rain before drifting inland and bringing its heavy rainfall across the South and into the Mid-Atlantic states by early next week.

President Donald Trump said his administration was “as ready as anybody has ever been” to respond to the storm.

“We’ll handle it. We’re ready. We’re able,” Trump said Wednesday outside the White House. “We’re fully prepared. Food, medical, everything you can imagine, we are ready.”

The president signed federal emergency declarations for the Carolinas and Virginia, a move that freed up federal money and resources. He also urged residents who live in the path of the storm to “get out of its way. Don’t play games with it. It’s a big one.”

More than 1 million people along the coasts of North and South Carolina and southern Virginia have fled. They have faced gas shortages at some stations, while those who have chosen to stay put are clearing store shelves of emergency supplies.

Experts said this could be the strongest storm to hit the Carolina coast in more than 60 years.

The most powerful and only Category 4 hurricane in recorded history to hit the North Carolina coast was Hurricane Hazel in October 1954. Nineteen people in North Carolina were killed, and 15,000 homes were destroyed.