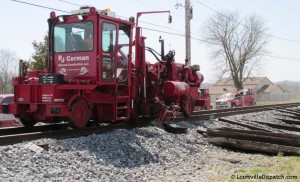 Crews from the R.J. Corman company were hard at work yesterday to replace ties along the P&L Railway track as part of routine maintenance that the company is contracted to do.

The 9 foot long, 200 pound wooden ties, which serve as part of the foundation for the track bed, are periodically replaced to ensure that the rail cars are fully supported.  Wooden ties have a relatively long life span – typically between 40 and 70 years, although numerous factors can affect that longevity.

Unlike in past decades, the process of replacing the ties is a much less daunting task these days.  Rather than having to manually pull spikes, dig out and replace ties, and hammer in new spikes, much of the backbreaking labor is now handled by heavy equipment built especially for the task.  That equipment includes tie extractors/inserters, spike pullers, tampers and more.  The foreman at the site I observed told me that, using this equipment, their team can replace approximately 2,000 ties per day.

You may recall R.J. Corman and the P&L Railway being in the news together after the R.J. Corman Derailment team responded to the October 29, 2012, derailment of a P&L train.  The derailment at mile post 20.2 just south of Valley Station caused over $700,000 in damages to rail equipment, including damage to ten of the 33 HAZMAT train cars.  The damage to the HAZMAT cars resulted in the release of chemicals that prompted widespread evacuation and shelter-in-place orders around West Point and southern Jefferson County.  The Federal Railroad Administration official report determined that a broken section of rail was to blame for the derailment. 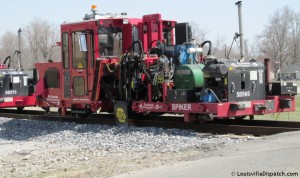