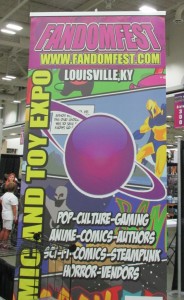 The FandomFest Comic and Toy Expo is drawing large crowds to the downtown Kentucky International Convention Center as movie and TV stars, artists, authors, vendors and fans gather to celebrate all things comic, sci-fi, pop, steampunk, horror and more.  The event was expected to draw record numbers and, based on the first two days, it appears to be on track to do just that.

The weekend-long event kicked off with the FandomFest FANtastic Parade which looped through downtown on Thursday.  The expo itself opened Friday evening at 5PM, allowing visitors to roam the vendor hall and participate in events such as celebrity Q&A, games shows, photo ops, masquerade balls and more.

Fans enjoyed extended hours today from 10AM until 7PM, when the after-hours festivities start.  Celebrities at the event include big and small screen stars such as the cast of Star Trek, Walking Dead, Defiance, Being Human, Star Wars, Lost Girl, Clerks and others as well as popular comic artists, authors, anime panels and more.   After spending the day rubbing elbows with fellow fans, gamers and cosplayers and meeting their favorite heroes (or villains), fans participated in after-hours events including the film fest awards ceremony, a drive-in movie event featuring Transformers:  Age of Extinction with Mark Ryan (Lockdown) and Bumblebee in attendance, the rave afterglow dance and a VIP party. 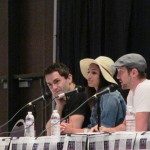 For fans who haven’t made it out to FandomFest yet – or visitors who didn’t get enough the first two days – the event continues Sunday from 11AM through 5PM.  Sunday’s activities include vendor hall hours, more celebrity photo ops and Q&A sessions, and special sessions and talks ranging from True Blood and Walking Dead discussions to cosplay makeup and wardrobe lessons to writing and illustration pointers.  Click here for the full FandomFest schedule.

Single day tickets are $30 and can be purchased from the FandomFest website or the registration booth at the Kentucky International Convention Center at 221 Fourth St. in downtown Louisville.

Check back later for more photos from FandomFest 2014 Louisville.