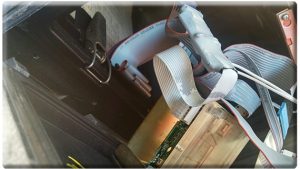 Kentucky Department of Agriculture inspectors found this skimmer inside a fuel pump in a Richmond retail establishment.

Kentucky Department of Agriculture inspectors discovered a credit card “skimmer” during a routine inspection of a motor fuel pump at a Richmond retail establishment earlier this month.

“This device was discovered by our inspectors as part of their everyday job duties,” Agriculture Commissioner Ryan Quarles said. “We took on this responsibility at no additional cost to Kentucky taxpayers. This discovery saved consumers thousands of dollars in fraudulent charges that could have been made with data stolen by the use of this device.”

The skimmer – an electronic device used to capture data from consumers’ credit cards – was removed and turned over to Richmond police.

Losses due to credit card skimming are expected to exceed $3 billion globally this year, according to consumer transaction technology company NCR of Duluth, Ga.

The KDA is charged with the task of inspecting motor fuel pumps in every retail establishment in the Commonwealth once a year to ensure that the amount of fuel dispensed matches the amount shown on the pump, and checking to make sure pumps are in proper working order. As part of the inspection, they look for signs that a pump has been compromised by thieves who install skimmers to steal consumer data. The data is used to produce fake credit cards and make fraudulent charges on the victim’s account. Inspectors shut down any pump that may have been tampered with and report the incident to law enforcement authorities.

Jason Glass, assistant director of the KDA’s Division of Regulation and Inspection, said card readers on fuel pumps are especially susceptible to tampering because pumps often are located out of sight of an attendant.

Glass said retailers are taking action to prevent credit card skimming by installing proprietary locks on pumps, using security tape to seal the pumps, and logging the numbers on the tape to make sure the seal hasn’t been broken and replaced. Some pumps shut down when they are entered unlawfully, Glass said. Credit card companies are deploying technology to make credit cards harder to skim, he said.

Glass said consumers can help themselves by looking for signs that a pump has been tampered with, such as locks that appear to have been compromised, doors that may have been pried open, and security tape that is broken or doesn’t adhere to the pump.

Consumers may report suspected tampering to the retailer, law enforcement, or the Kentucky Department of Agriculture. To submit a report to the KDA, call (502) 573-0282 or email ag.web@ky.gov. Please include the retailer’s name and location, the pump number, and the fuel grade.